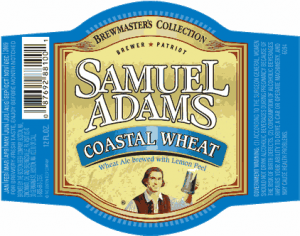 Information: (Bottle) “Hazy and golden in color, this brew is a fresh twist on the popular Hefeweizen style. Eureka and Lisbon lemons, from three growing regions in California, balance out the wheat malt character, resulting in a crisp and refreshing wheat ale with subtle lemon flavor. Cheers!”

Another weekend, another variety pack. Hey, what can I say, I’m a sucker for it. This time around we have the Sam Adams Winter mix, as it were, that comes equipped with six different styles, two of each beer. My first choice is completely new to me with a pale yellow label that touts this Hefeweizen style as a ‘wheat ale brewed with Lemon Peel.’ Now, generally, I’m not a big fan of fruit-forward beers, however I do like the refreshing addition of Lemon. Well, let’s crack this fella open.

I can’t believe I’m even saying this, but the pour looks starkly similar to Mountain Dew… that’s the kind of color scheme we’re working with here. The head is rapidly foamy, but it’s fleeting and sags into a much lighter centimeter’s worth of a white cap. The smell is very citrusy, with no surprise, with notes of wheat and subtle malts.

Wow. I’m not used to drinking something so refreshing and light, as I’m more apt to tackle a darker, thicker brew on a regular basis. This beer is very delicious and satisfyingly well-rounded.  There is definitely the Hefeweizen style there, without a doubt, but the addition of lemon absolutely adds a whole different chord to an otherwise standard (albeit fine) type. For those unfamiliar with just what a Hefeweizen is, let me refresh your knowledge: From Wikipedia “Wheat beer is a beer that is brewed with a large proportion of wheat. Wheat beers often also contain a significant proportion of malted barley. Wheat beers are usually top-fermented (in Germany they have to be by law). The flavour of wheat beers varies considerably, depending upon the specific style.” Basically Hefeweizen is just a tye of wheat beer, and this has that wheaty, grassy, hay-ish flavor one has come to expect with the variety, but the added benefit of citrus. Quite delicious and ought to go very well with something salty like a Holiday Ham.

Rating: * * * *
A Hefeweizen of a different color (quite literaly) and with the added flavor of Lemon.