Coca-Cola has been involved with stock car racing for more than 50 years and has been the official sparkling beverage of NASCAR since 1998. A signature part of the brand’s NASCAR association is the Coca-Cola Racing Family — a group of top drivers that includes Greg Biffle, Jeff Burton, Denny Hamlin, Bobby Labonte, Joey Logano, Jamie McMurray, Ryan Newman, Danica Patrick and Tony Stewart. The Company also maintains relationships with Dale Jarrett, Ned Jarrett, Kyle Petty and Elliott Sadler

The Coca-Cola Carmike 2012 NASCAR program (running Aug. 1 – Sept. 30) offers fans the opportunity to purchase Coca-Cola Racing Family collectible cups exclusively at Carmike Cinemas, with a donation from Coca-Cola and Carmike going to the USO to help support our troops and their families. 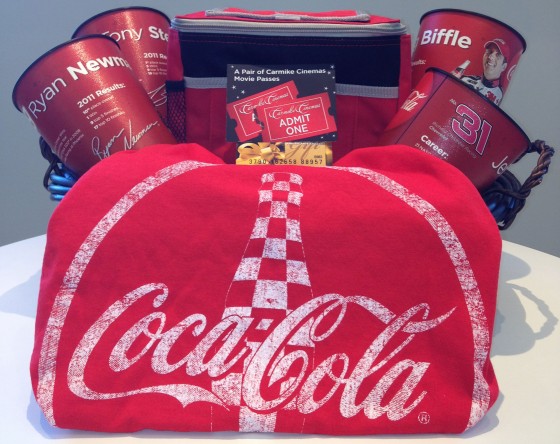 To help spread the word about this great cause, Coca-Cola has provided us with the amazing prize pack above, which consists of four Collectible Cups, two Carmike Cinemas movie passes, a Coca-Cola cooler and t-shirt and a $50 AMEX gift card.

We’ll pick a winner at random at the end of August. Good luck!

General disclosure: The prize was provided by Coca-Cola. Neither Coca-Cola nor its program partners (NASCAR + Carmike Cinemas) are sponsors, administrators, or involved in any other way with this giveaway. All opinions expressed in the post are my own and not those of The Coca-Cola Company or aforementioned partners. Winner to be chosen by Gunaxin.