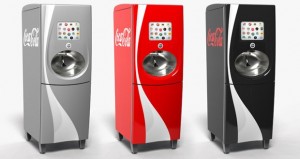 The future is now! Ever miss some of those long forgotten and discontinued sodas? Ever wondered what a Mezzo Mix tastes like? Ever have a hankering for a Fanta Banana™? This may be your lucky day! Coca-Cola has unveiled the Coca-Cola Freestyle, a new generation of drink dispensers that let customers use a touch screen to choose from more than a hundred varieties of soda. So long to the old fashioned soft-drink dispensers and make way for this reinventing of the dispensed beverage business. If you’re lucky enough to live in San Diego or Atlanta, the new machines are being rolled out for test-marketing this summer.

The project was created under great secrecy by Coca-Cola and DEKA Research and Development and dubbed project Jet. The name comes from a water fountain in Geneva, Switzerland, called Jet d’Eau, that was groundbreaking technology when unveiled in 1886. These new machines replace the bags of syrup with concentrated flavor cartridges a little larger than a video cassette tape. So soon you might have a few more choices for your dinner drink. Although the downside is the lady in front of you in line who doesn’t think to remove her wallet until after the cashier gives her the total then must fish around in her purse for the exact change will now stand there for five minutes trying to decide which flavor combination she wants while everyone else stands and waits. A bigger question is what are the other flavors? Broccoli? Salmon? A1? Or even Jack and Coke? No alcohol may equal no sale. Though, maybe you can go for the ultimate “suicide” soda: ALL 100 FLAVORS! Also, might I suggest a random button. Here’s a video of the machine: