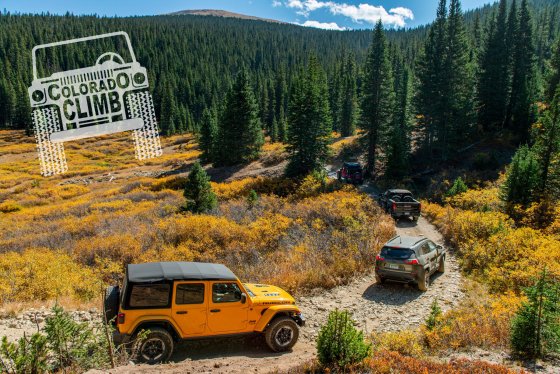 It can take some time to get used to being over 11,000 feet above the sea. The mountains of Colorado can get that high and more. Getting a vehicle to that height can mean a true test of its capability and of the driver’s lungs. At the Rocky Mountain Redline Colorado Climb, we tested both, ascending the Georgia Pass to the top of the Continental Divide near Breckenridge, Colorado. 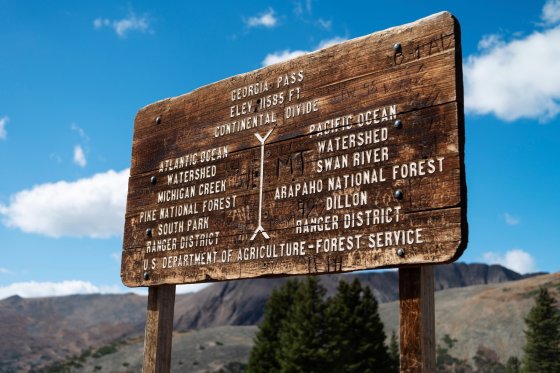 With vehicles from a dozen manufacturers on hand, expert guides in fully-outfitted Jeeps, and a great night’s rest at the Beaver Run Resort & Conference Center, we were ready to go. The overnight was essential as the trek to Breckenridge took us from the 6,000-foot elevation of Cheyenne, Wyoming to the 9,600-foot elevation of Breckenridge. Acclimating to the altitude is important, especially if traversing some hardcore mountain trails is the plan.

We started by lining up our available vehicles for the morning, eating a hearty breakfast, and then heading to the staging area at Golden Horseshoe Tours. GHT is a re-creation of a mining camp and rendezvous point from the early days of the gold rush that replaced mountain men and fur trappers with gold miners in the late 1800s. 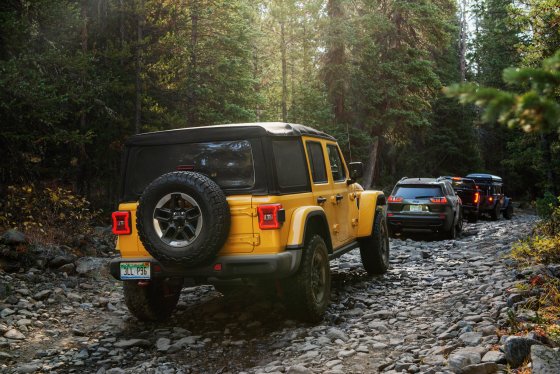 We started the day, because we’re hardcore like that, with the tougher trail and the more trail-ready vehicles in our lineup. With GMC, Jeep, Lexus, Ram Truck, and Toyota represented for this portion of the day, we had some serious off-road gear to choose from. All factory standard, these were all trail-ready machines as-is. 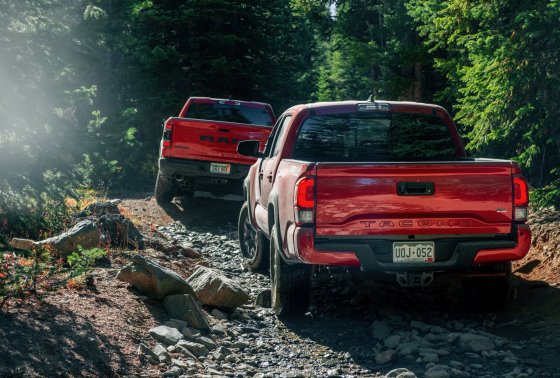 The trail at hand was a rocky and rough but wide track through the forest to the summit. It was a more direct route than the one we’d take later in the day for the lighter-duty vehicles in our group and had plenty of challenge for the truly off-road ready of our choices. This was truck and SUV territory and on this trail, we were often passed by ATVs, which were the most common vehicles on this particular route to the top. 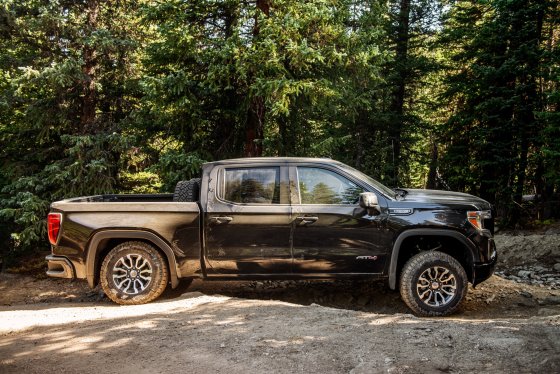 This is the newest of the GMC Sierra lineup to be introduced this year as the all-new 2019 Sierra kicks off. The Sierra (and its Chevrolet Silverado twin) were introduced earlier this year as brand new pickup trucks and a new-generation of GM excellence. The AT4 adds a lot of off-pavement running gear to the Sierra, letting it compete with similar offerings from the other truck makes. The Sierra AT4 is not as pushy about its off-road performance as are most of its rivals, but it’s just as capable as any of them. 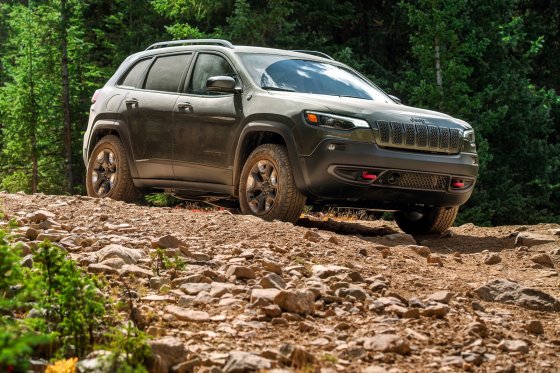 The Cherokee was a bit of an odd-man out here. This is a crossover, not a true SUV, and the 2019 Cherokee Trailhawk had less ground clearance than every other vehicle on this trail. Yet, being a Jeep, it did the climb without need of assistance. If the driver was astute and paid attention to where the rocks were and how to go around or lift one side over them, the Cherokee was happily challenged, but fully capable of getting to the Continental Divide. Not a surprise, in retrospect. 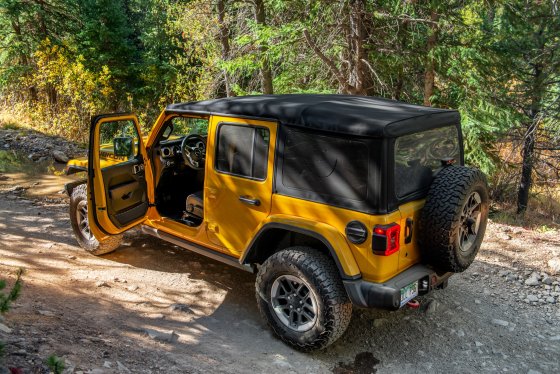 They don’t call them “Jeep trails” for nothing. The 2019 Wrangler sets the bar for others to meet when it comes to off-pavement prowess. For our trail day in the bigger four-door Unlimited model, everything was easy. Because when you’re really good at something, it looks easy. That’s where the Jeep was at. Getting to the 11,585-foot summit was no problem. 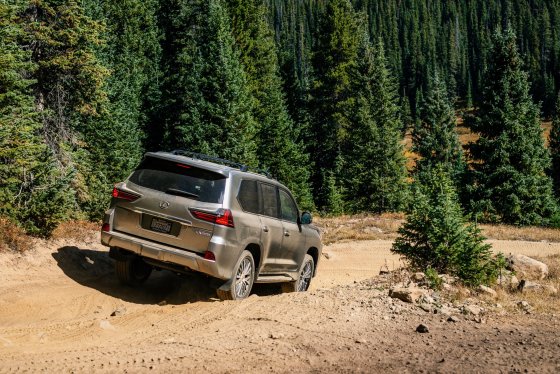 The big Lexus is a fun machine to get around in when there are no roads. It’s literally built for this kind of thing, though most who look at the 2019 LX 570 would not assume so. The LX is Lexus’ take on the Toyota Land Cruiser and has all of the legendary capability of that model, but with more comfort included. Some drivers are hesitant with the big LX 570, worrying that it won’t be able to get over some terrain. Others in the know, though, will push it and be happy with the results. This rig didn’t win Baja so many times without having some kind of backbone. 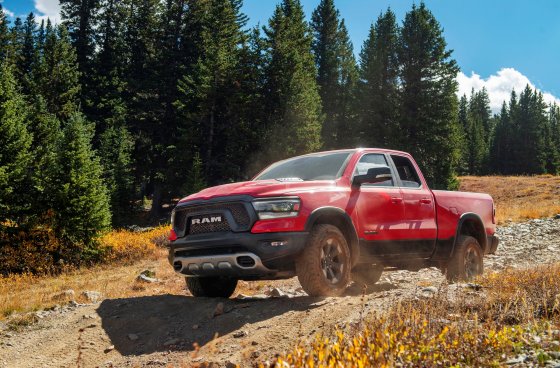 This is Ram’s off-road rig made to compete with the AT4 above and the Ford Raptor. At least in sales. In marketing, the Ram is a wholly different beast aimed directly towards doing the kind of thing we were doing with it on this day. A forest and trail off-road machine, the 2019 Ram Rebel lets you know that it’s ready for action from every angle. Big, beefy tires, huge fender flares, tire tread on the seats, thick RAM logos.. Everything says “let’s go play in the mud and rocks.” That’s the Ram Rebel in a nutshell and it had no problems on our trail up the mountain. 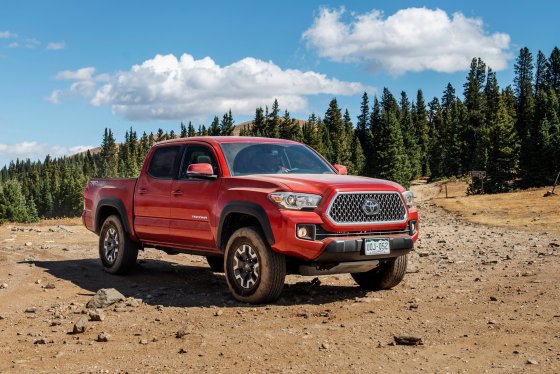 The Toyota Racing Development (TRD) models of Toyota’s trucks and SUVs are made for trails and dirt. The TRD Offroad option for the Tacoma adds a lot of lift, off-pavement gear, and confidence for the driver when out on the trail. With a short wheelbase and strong little V6 when in low gears, the 2018 Tacoma pushed along the trail without worry. Of all of the pickups on hand, only the Tacoma had no problems with narrow points of clearance. 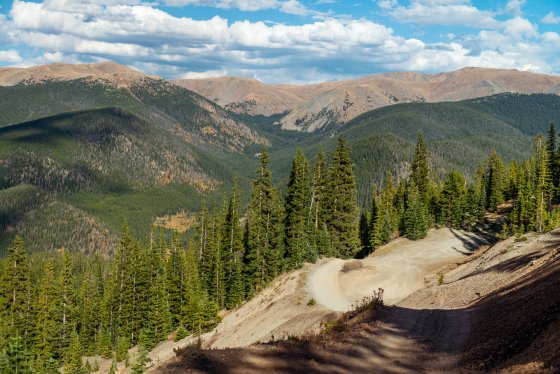 Once we’d made the summit, we spent some time gloating over our mastery of the mountain as denizens of the peaks looked on with amusement. The mountain goats weren’t impressed, it appeared, but we were happy anyway. We eventually made our descent to return to base camp for lunch and to swap into crossovers for another trail. This proved to be a lesson in what modern “kid toters” are capable of doing. 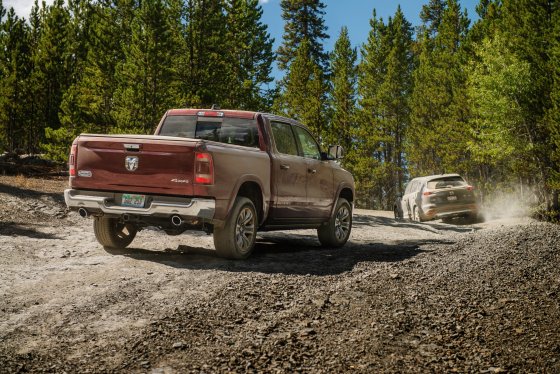 The trail for the crossover-SUV mix was easier and required far less ground clearance to master, but still had some breathtaking drop-offs and fun soft dirt to test our mettle. 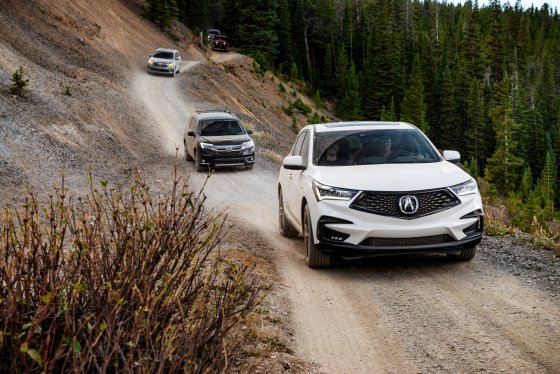 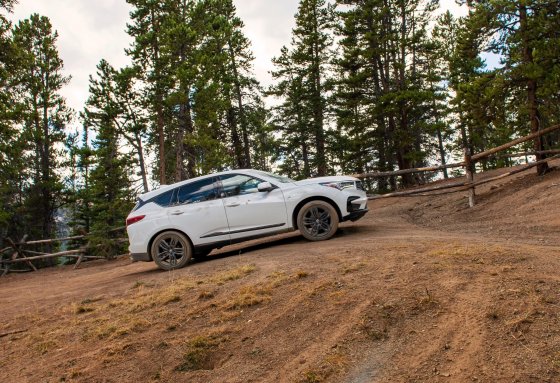 This was definitely the most surprising vehicle in our lineup for the day. The RDX is not really known for any kind of off-pavement capability and the A-Spec is definitely a road-going speedster rather than a light off-road bouncer. Yet the 2019 RDX proved itself to be as capable as any other machine when it came to getting around off the roadway. Even the Acura people present were a bit surprised at this. They took the risk and they came out winners. 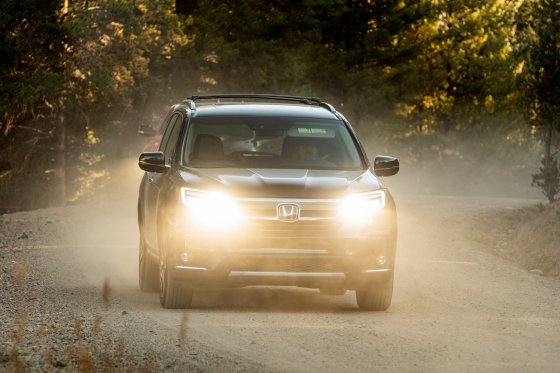 The Pilot is one of the best-selling three-row family crossovers on the market, and for good reason. We aren’t fans of the push-button shifting, but we are fans of the 2019 Pilot’s capabilities when out and away from paved roads. In the ice drive earlier this year, we drove the Pilot on a frozen lake and loved its dual personality. Out here in the dirt and stones, we learned that the 2019 Pilot is also quite good at traversing the wilderness at altitude. Provided those driving pay attention to the trail. 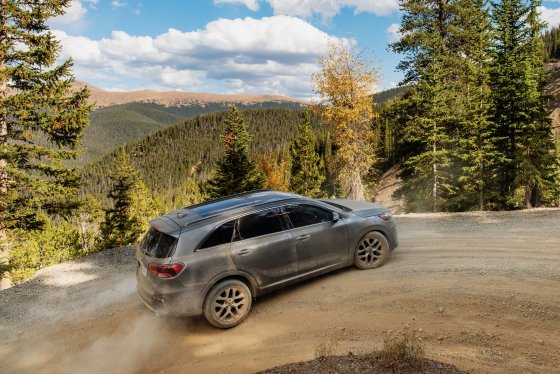 We expected good things from the Kia, knowing that the Sorento is a favorite get-around machine for families and weekend campers. The 2019 Sorento did not disappoint with its showing of capability getting up the trail and around on the mountain. Frankly, we’d have been surprised if it wasn’t able to do it. 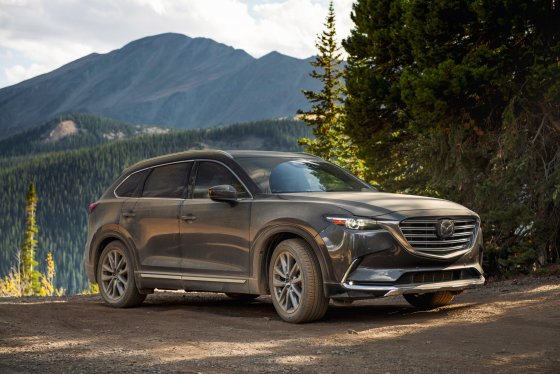 In a way similar to the Acura, the Mazda CX-9 seemed a little out of place at our off-road event. Yet those of us who are familiar with Mazda’s crossover lineup weren’t too concerned. The CX-9 is all-new this year, but that didn’t change its ability to get around out in the rough. The Mazda is mostly known for its fun drive quality and tight suspension, but off the road, it’s still more than capable of getting where the others can get. 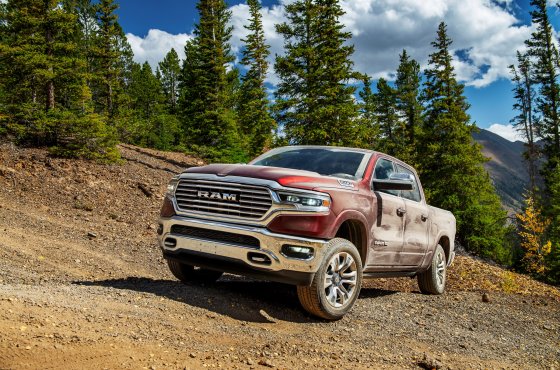 Out on the crossover trail was a truck. At first we thought the big Ram was there as a support vehicle, but realizing it was a high-end, gilded (literally) Longhorn model, we wondered why. Then we found out we were to drive it with the crossovers and SUVs on the trail. So we did. Happily. The Ram’s only problem was its sheer size. Our trail was made for smaller vehicles, so extra points to the hard turns and folding in the side mirrors to avoid trees was required, but the big truck otherwise had the easiest time of getting up the mountain. 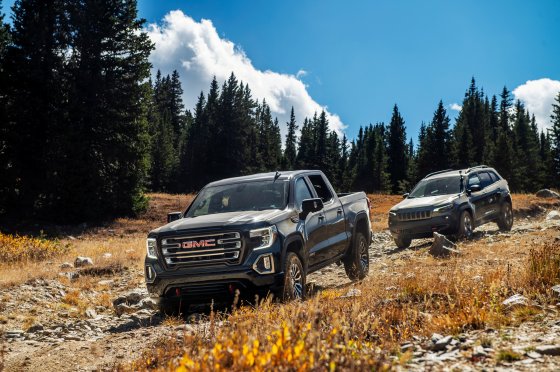 Our trip to Breckenridge was a great time. We learned what these everyday vehicles are capable of and, in some cases, were surprised at their capability. Rocky Mountain Redline did a great job of organizing our trail adventure and the manufacturers showed some bravery in allowing us to use their vehicles as test subjects. Colorado is beautiful this time of year and the Rocky Mountains are a wonderful place to be. 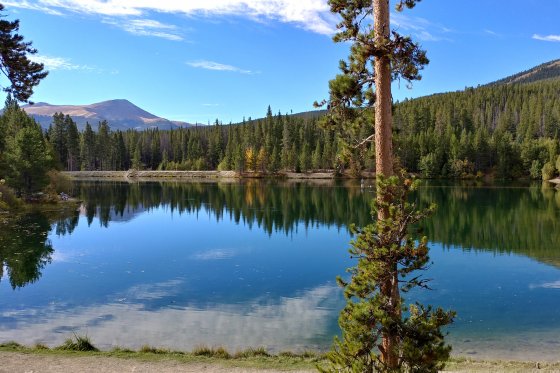 On the way down the mountain towards home, fellow Gunaxin contributor Tim Esterdahl and I stopped at a local mainstay, the Breckenridge Outdoor Education Center. There we toured with Ella Greene, Operations Manager, and saw how this local charity helps those with disabilities toss out their perceived limitations and learn to rock climb, ski, kayak, and more. They do it mostly by helping one another under the tutelage of awesome volunteers. The BOEC is a great place and very worthy of your support. 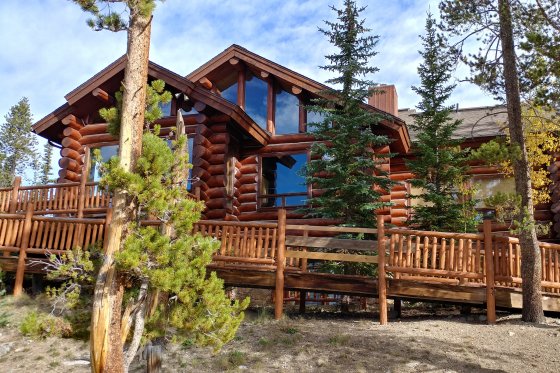