Comedy Podcasts: Three of the Best

Nowadays there’s no excuse to be bored during your commute. Tired of sitting in traffic? The same views from the bus window? The same radio morning show jokesters?

Thanks to podcasting, you have a huge amount of options for free audio entertainment. You can find news, sports, education – anything. But of course here at Gunaxin we like comedy podcasts. 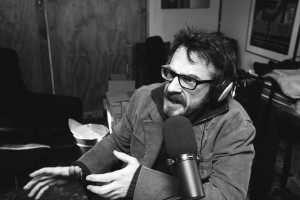 For our money (figuratively -the podcast is free), Marc Maron’s WTF podcast is the best. Other than a quick story Marc tells at the beginning of the show, there is a guest for every show, so the podcast is all conversation. As a comedian who has been around since the ’80s, Marc knows a lot of other comedians and brings them in to his garage for conversations on comedy, life, and everything in between. There are no sketches, no bits, no sound effects, not even so many jokes – just heartfelt, interesting conversations between comedy industry insiders.

New episodes come out twice a week and can be downloaded from the WTF website. Like most podcasts, the newest shows are free and the older ones can be purchased. 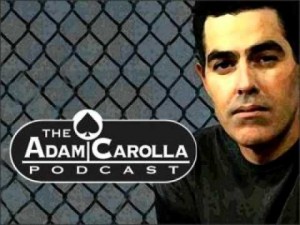 For a podcast that’s a lot more like a conventional radio morning show, check out Adam Carolla, known for The Man Show on Comedy Central and, before that, Loveline.

His podcasts feature a daily guest plus news segments and music. He might not be as good an interviewer as Maron, but Adam is hilarious and a masterful digresser. In place of deep, interesting conversation he delivers laugh-out-loud commentary.

The show comes out every day and he has a team behind him, including a very attractive and funny newsgirl named Alison Rosen. The news stories themselves are mostly irrelevant – just starting points for jokes and commentary. Same goes for the interviews – you might not know the guest’s history, but you’ll definitely get some laughs.

His podcast comes out every day and is supposedly the most popular daily podcast on iTunes. 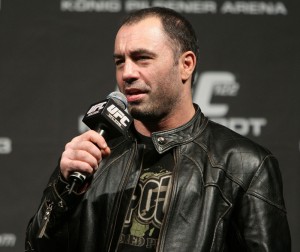 Possibly even more prone to rants and digression is Joe Rogan. You know him from Fear Factor and UFC. However, the guy is an accomplished stand-up comedian, not to mention an enthusiastic, unrepentant weed smoker, as you can hear on his podcast, The Joe Rogan Experience.

One of the most hilarious things we’ve heard, anywhere, was Bert Kreishcher’s story about Tracy Morgan on the show. This is one of the strengths of Rogan – rather than constantly interrupting with his own jokes, he really enjoys getting stories out of his guests.

The podcast comes out irregularly and the website isn’t very good. Also the shows run a little long. But you get a couple of super witty but otherwise normal dudes sharing ideas, telling stories and having funny conversations. Do these guys have the best job or what?