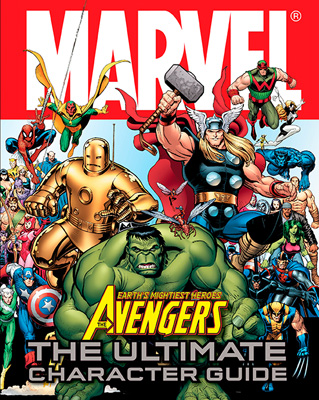 Iron Man 2 will be coming to DVD this month and for me it’s just another step in the right direction for The Avengers movie. This film will showcase Iron Man, The Hulk, Thor, and Captain America. For Fanboys and Fangirls alike, we all know who is who in the Avengers world. In the movies there might be some “inside” dialogue that regular moviegoers won’t get, but those of us in the know eat it up. However, I don’t know everything about the Avengers inside and out. That was the case before I read the Marvel Avengers: The Ultimate Character Guide by DK Publishing.

This hardcover book has every Avenger and their arch-enemies in alphabetical order and describes in detail each character. The book not only describes each character’s origin and relation to the Avengers, but it updates you on the most recent news of each hero like Iron Man, Thor, Cap, Wolverine and Spider-Man. The book discusses each comic hero or villain’s power, enemy, and historic battles that were fought through the years. For me, it was great to learn more about secondary characters in the Marvel Universe as well. Once I picked the book up, it was hard to put down.

For comic geeks or for those who want to learn more about the Avengers this is a must read! Check out DK Publishing’s website or Amazon.com to purchase this book that came out on September 20th.