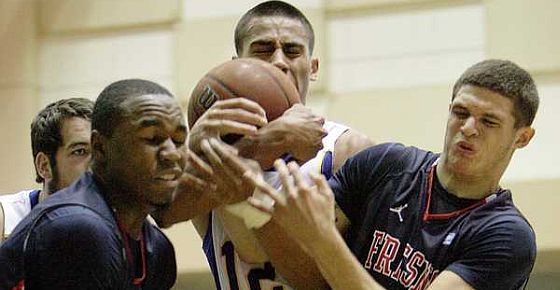 The college basketball season just kicked off last week, and we have an early entry for the worst game of the year. In fact, the game last night between Fresno and U.C. Riverside might rank among the worst games in college basketball history. In a game matching up two win less teams the two schools managed to score a combined 69 points in a 39-30 Fresno win. To put that point total in perspective, over the last decade NCAA teams have averaged between 67 and 69 points a game each.

This was a well rounded abomination. U.C. Riverside only made 12 of 49 shots from the floor, for a 24.5% rate. That was significantly better than their 2-19 shooting from beyond the three point line (10.5%). To prove they were well rounded, Riverside also managed to miss 8 of 12 free throw attempts. Fresno State wasn’t much better, shooting 28.2% from the field. The Bulldogs did managed to go 4-9 on their threes, providing the difference in the game.

After scoring the first three points of the game, Riverside went scoreless for the next eight minutes of game time. Fresno built up an impressive 13-11 halftime lead, almost insurmountable in this game, but Riverside went on a scoring binge at the start of the second half, taking a 23-18 lead with 13 minutes to go. That was their last lead of the game, however, as they proceeded to go scoreless for the next nine minutes.

The MVP of the game was Fresno guard Allen Huddleston, who inexplicably scored 17 points on 4-11 shooting. The LVP has to go to Riverside C Davin Guinn, who scored two points before fouling out.