That image up there is in no way Photoshopped. That is three (four if you count the little one on high hat, and you should) robots shredding their dead metallic hearts out.

Known collectively as Compressorhead, the trio just dropped a little taster of their new album in the form a YouTube video of them playing the shit out of the classic Motörhead song “Ace of Spades.”

If that’s not enough, check out the band’s official site where you can see them play some AC/DC or if you’re so inclined, a little bit of Pantera. As if robots weren’t already scary enough without the ability to play a facemelter while staring at you with completely unblinking, bright red LED eyes.

In Gunaxin’s opinion, the standout member of the band is Stickboy, the four-armed drum playing behemoth with a hockey mask for a face. Mainly because we’re so glad we got to type that sentence out without being on drugs. 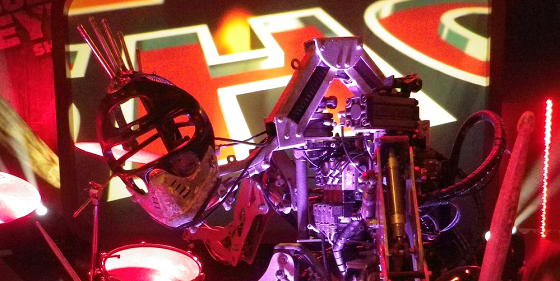 The Terminator can suck it.

If you’re interested in all things metal and want to see the most metal (metalest?) band out there, you should definitely check out Compressorhead’s website. You owe it to yourself, because if you die tomorrow, would you really be happy with yourself knowing that you could have seen a four-armed version of Johnny 5 bust out a sick drum solo and didn’t?