Conan, Letterman and Leno, Oh My! 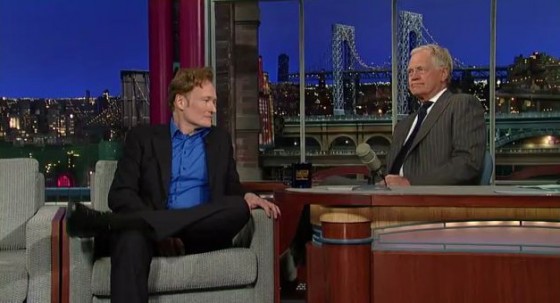 There are two types of late-night talk show watchers: the 11:30pm crowd and the 12:30am gang. I’ve always been a card-carrying member of the 12:30am crew, so David Letterman and Conan O’Brien were my boys when they filled the time slot. The post midnight shenanigans are just a bit edgier and eccentric, which is right in my comedy wheelhouse.

When both hosts moved to 11:30pm, I kinda stopped paying attention, mainly because I was preoccupied with Stephen Colbert’s absurd antics. That said, I still respect Conan and Letterman and feel a kinship to their dislike of Jay Leno, who of course usurped The Tonight Show from both gentleman. Last night’s Conan appearance on The Late Show was must-see TV as the two shared some not so fond memories from the infamous “Late Night Wars.”