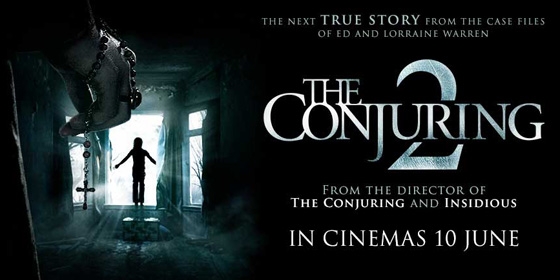 The name’s Wan. James Wan. A master of horror, a one man resurgence of classically influenced films that can achieve an R-rating simply for being scary. The guy who diverged from his beloved genre to pull off the near impossible by making the latest “Fast & Furious” installment, considering the circumstances under which it was made. 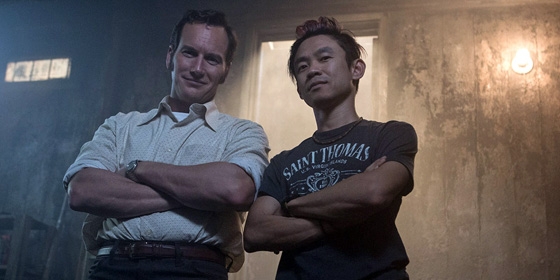 Wan, the director of the original “Saw” (a film thoroughly besmirched by its successors), the under-appreciated “Dead Silence” and the first two “Insidious” movies, returns to continue the purportedly true saga of ghost hunters Ed and Lorraine Warren that he began in 2013’s very scary “The Conjuring”. If you don’t know who the Warrens are, they were folks involved in the case that inspired “The Amityville Horror” movies.

It’s in that infamous house that “The Conjuring 2” opens, as Lorraine, reliving the brutal multiple homicide through an out-of-body connection with the perpetrator, tells husband Ed that she never wants to get that close to hell again. That’s tough when a cat nap can transport you into a paranormal abyss where an uncommonly terrifying nun awaits. Jump to sometime in the near future, and Lorraine has a nerve rattling wake-up call, so to speak, when this pale-skinned phantasm indirectly suggests: “Time to retire”. 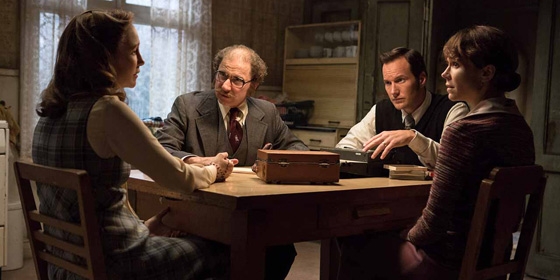 Not bloody likely. Though Ed agrees, it’s not long before a family in England (who are the prominent characters in the first third of the film), come under siege by a mysterious force that, like in many ghost stories, enjoys tossing chairs and bookshelves around for a while before getting down to brass tacks. The suspected culprit is an old man who died in the house of an aneurysm some years ago, and he’s none too happy about the Hodgsons — divorced mom Peggy (Frances O’Connor), two girls (Madison Wolfe, Lauren Esposito) and boys (Benjamin Haigh, Patrick McAuley) — living there. At first, the old man’s favorite rocking chair and the remote control (a clunky 1970’s clicker) are indications that the deceased curmudgeon is still around. Until he picks young Janet to possesses. It becomes more violent with each successive bout (an incredible performance from Wolfe), even after the family seeks refuge with their neighbors across the street. 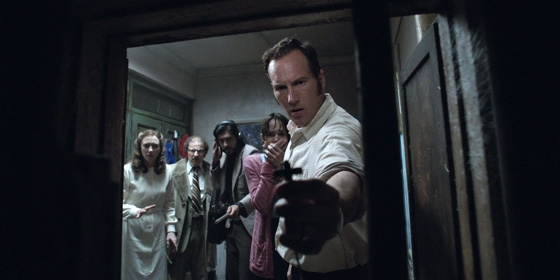 So, despite Lorraine’s thoughts about giving it all up, the Warrens head East and hole up with the Hodgsons to expel the demonic force. However, what they encounter is not what it had initially appeared to be. Lots of ominous things happen, sort of haphazardly throwing clues our way until it’s “Love it or List It” time (be sure to read the text at the end credits for a surprising fact).

Wan maintains his trademark eeriness, and DP Don Burgess should inspire relevant voting entities (ahh…emmmm… Academy) to take horror movies a little more seriously in the technical categories. His patience behind the camera is something that the majority of genre flicks lack, and it is what will keep the majority of audience on the edge of their seats when nothing is actually happening for 15 minute stretches. 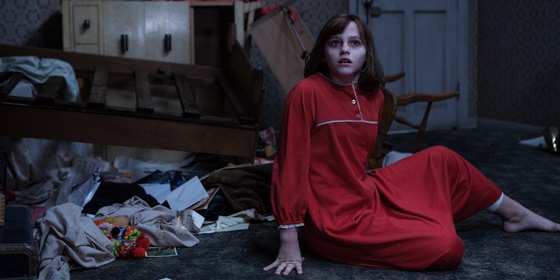 For all the screams in the audience, I only seized up once or twice, when the jump scares could often be categorized as cheap–unusual for Wan, who thrives on atmosphere and impending doom. Which there is still plenty of: the camera work is the bar to which all horror filmmakers should aspire–creeping around corners and lingering on fuzzy background images, a la John Carpenter’s indelible sequence at the end of the original “Halloween”. One scene in which Ed interrogates a deity to which his back is turned is absolutely brilliant. The sound design, set design and Joseph Bishara’s score all enhance the creepy factor for a running time that is about 45 minutes longer than typical for its type. 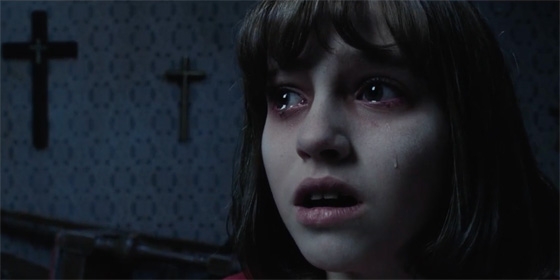 The good, the bad, and the technical: The power of Christ might compel just a bit too much in Wan’s sequel, which is a bit of a slog when the solution is about as exciting and challenging as a Sudoku puzzle. At times I felt like it should have been called “The Convoluting”, as some obscure events/visions felt a bit slapped together–even unnecessary– in order to keep things moving forward. But the film shows an unusually deep faith in humanity, as well as its characters’ belief in a higher power (as well as one another). The things I liked about it are the things I typically do not respond favorably to: it’s clichéd yet somehow not; it’s overtly heartfelt yet not cheesy; old-fashioned yet not hackneyed. The film unravels in a mature, thought-provoking, sometimes even humorous manner, not only playing devil’s advocate with itself but challenging the politics of the church and how asinine bureaucracy in general can be. This might not be Wan’s scariest flick, but it’s a good one nonetheless.

For more thoughts on The Conjuring 2, visit DCFilmdom.com

This might not be Wan's scariest flick, but it's a good one nonetheless.