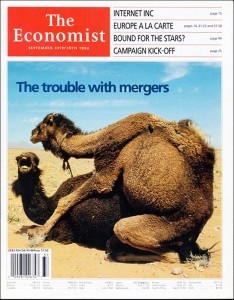 Back in 1994 there was a big issue going on with the so-called “mergers” of various public sectors and businesses that had to either vanish, or band together. The Economist magazine decided to “abandon” for once the boring and typical accounting diagram covers and focused on a very tender moment two camels were sharing. The specific cover offended many professionals who couldn’t see the humorous side of this and considered it a blasphemy for the history of the magazine to have such “poster” in public view. 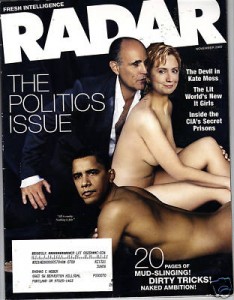 A few months before this issue of Radar magazine was published, Vanity Fair had released its Hollywood Issue with Keira Knightley and Scarlett Johansson pictured semi-nude and laying next to the elegant (and dressed) Tom Ford. The specific issue became one of the biggest sellers in recent history and the editors of Radar Magazine were inspired.

A few months later a more humorous but still “sensual” (?!) cover would be released; the two sexy young ladies would be replaced by Obama and Hillary Clinton, while the elegant gentleman of this cover would be Rudy Guiliani. Some found it funny, some found it cheap, but the only sure thing is that the magazine didn’t manage to achieve 10% of the sales the similar cover of Vanity Fair produced. 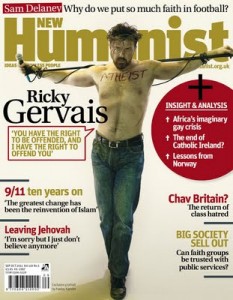 Let’s just say that you are a new magazine and you are desperately seeking ways to make a huge impact and entrance to the world of press; what’s the best way to do so? Mixing religion with an atheist celebrity maybe? The editors of New Humanist probably thought about it and decided that any celebrity portraying Jesus would easily make millions of fanatic Christians go nuts. As we all know, there’s is no such thing as bad publicity….any publicity is good.

For some reason we tend to believe that the magazine’s staff was fully aware of this when they were deciding to put the famous atheist Ricky Gervais portraying Jesus, while next to him you could read the quote of the day, “You have the right to be offended and I have the right to offend you”. We must admit that the plan was really well-thought. 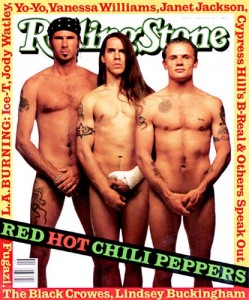 The Red Hot Chili Peppers have never been the most peaceful or classy band out there. Their wild stories and adventures with drugs and alcohol have been covered from the yellow press again and again, while Flea’s bizarre character and lifestyle has always been the favorite topic of the fans and tabloids. RHCP never minded getting naked for pictures (let’s not forget their infamous “Socks on Cocks Photos”) and back in June of 1992 they displayed their (almost) naked bodies, shocking the music community once again. 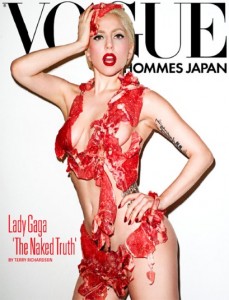 Let’s be realistic, if there was any female celebrity who could make her red lipstick and her half-naked body look good under some pieces of red meat (for a dress) then that’s Lady Gaga. Lady G is talented, bizarre, and has this unique talent to make unusual or even unreal things look good on her. For some magical reason they only look good on her, literally.

The publishers of Vogue Hommes Japan were probably fully aware of all of this and just invited Gaga and told her to improvise. Lady G did her thing and the specific issue became one of the biggest selling (Japanese) issues of all time worldwide. Some people should probably be really thankful to Gaga.