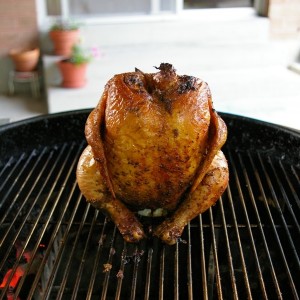 We at Gunaxin love drinking beer, but of course, sometimes we get hungry. So why not eat some food cooked with beer (or any alcohol for that matter). But we’ve always heard that all the alcohol cooks away, so isn’t this just a waste of beer. Well, according to a study by the USDA Nutrient Data Laboratory, it looks like we were wrong. Below is a chart of remaining alcohol after different cooking times.

And this means that it’s not a waste of beer, well not totally. You know you want to stick a beer can up a chicken’s ass right now, though since the beer will evaporate in a beer can chicken I’m not sure if the acohol will stick around for this one. Of course, there are plenty of other recipes where the alcohol won’t just boil away, such as beer battered chicken, beer braised ribs, sweet potatoes (you know, the one that your great aunt must have used a cup of bourbon instead of a table spoon) and Chili. I usually cook my chili for several hours to tenderize the meat, but there are quite a few recipes out there that only call for fifteen minutes or so of cooking, and that means a high alcohol content (for food anyway).

At first this sounds great, but after a little calculation it turns out that a pot of chili simmered for only 15 minutes will have an alcohol content of only around .75% (a beer is typically around 4-5% abv). You’ll have to eat quite a bit of chili before that buzz hits you.