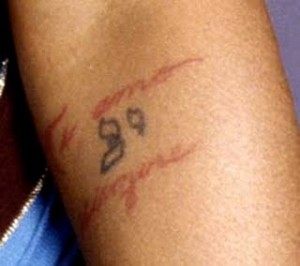 Aguilera's tattoo of her ex's initials in Hebrew.

Christina Aguilera, who is not Jewish, has a couple of Hebrew tattoos, mainly because her ex, Jordan Bratman, is Jewish. The problem? The ‘Yud’ and ‘Bet’ on her arm are the Hebrew initials of Bratman’s initials, so count Aguilera as one of the many people who made this mistake.

The Bible clearly says “Do not cut your bodies for the dead or put tattoo marks on yourselves. I am the Lord.” That means followers of the Old Testament who have tattoos are pretty much breaking the rules. However, like Aguilera, many Gentiles have Hebrew tattoos, including a guy I met on the Big Island of Hawaii whose arms were filled with them.

It’s not difficult to find a photo of a Hebrew tattoo, and any schmuck can put חי (Chai) on their arm and think they’re cool. So for this gallery, we’ll only focus on good Hebrew tattoos.

By the way, here is Aguilera’s MUCH better tramp stamp. Advantage: Hebrew speakers for Aguilera’s next fling. 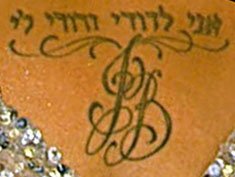 Sites to check out: