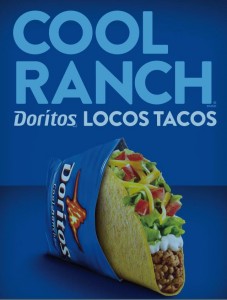 Doritos Locos Tacos quickly became the company’s most successful product launch ever, selling more than 350 million in less than a year. However Doritos fans have longed for the next chapter of that story, and the release of the Cool Ranch version.

Combine this news with Taco Bell’s awesome Super Bowl commercial, and the Run for the Border folks have really been kicking some ass recently. Here is that commercial, our favorite from the Big Game, in case you missed it :