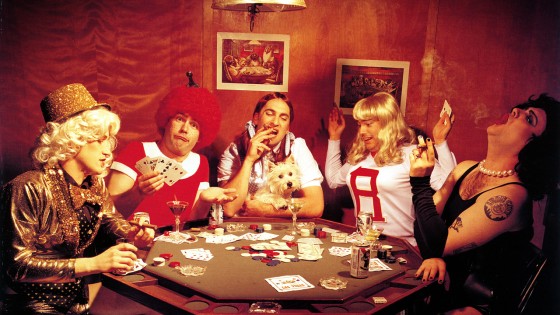 That’s right, let that sink in for a minute. These guys are the coolest band in the world. Proof? Citings? Evidence? Okay, fine! First off -and I will get into more here soon- they are strictly a cover band. Big deal, you say? Okay, wise ass, how about this: they are a Punk cover band that covers only songs you already know and love. Oh, now you’re intrigued? Of course you are. But before I delve too deeply into the who’s and what’s of this band, let’s listen to a song, shall we?

That, kids, was their version of Blondie’s “Heart of Glass” from ther Ruin Johnny’s Bar Mitzvah release. It was sick, right? Yeah, I know. So, does this Punk-Cover thing rock your juke box? Maybe another sample before I drop some learnin’ on ya.

What? Was that a cover of John Denver’s “Country Roads”? So they do that kind of music, too? Oh, my friend, they do everything! From one genre of music all the way to another, they Punk-Cover it all! I’m telling you, there is no reason NOT to like these guys! If you love music and you like it kicking a mess of ass, well, then MFATGG is for you! 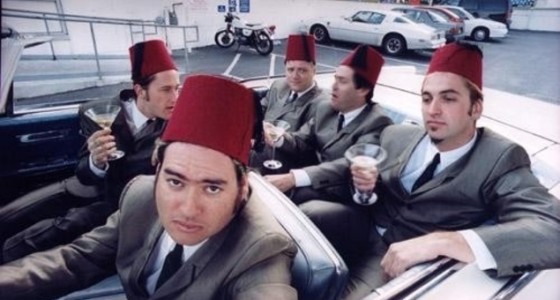 Now the band itself is a Super Group of sorts, thought they really don’t dig the term, and they tour and play festivals both in support of recent material, and when their respective bands aren’t on the road themselves. We’ve got Spike Slawson of Swingin’ Udders on lead vocals, Fat Mike of NOFX on bass and backing vocals, Chris Shiflett of Foo Fighters on lead guitar and backing vocals, and Joey Cape and Dave Raun of Lagwagon on rhythm guitar and drums, respectively. There are a few other rotating members but this is the line-up you hear on the albums, incidentally put out by Fat Mike’s label, Fat Wreck Chords. And now you know the cast. Here’s some more music!

That was obviously “Rocket Man” by Elton John on The Gimmes’ Have a Ball album. Are you getting more of an idea here on what to expect from these fun, fantastic, fabulous freaks? Believe it or not, this particular release has been around since 1997, two years after the guys actually formed the band. At first they only released a few songs named after the artists they chose to cover, but since Have a Ball, each follows more of a specific theme or a decade or two of music style. Their most recent CD came out late last year and it’s called, We are Not Men, We are Diva. Here’s a lick!

That was obviously Culture Club’s Karma Chameleon. And now you love these guys, too, right? Well sure you do! They are the very best! Okay, maybe I am a tad biased because I have always been something of a Punk fan and I was really only introduced to these guys from a cut they had on some Punk compilation CD I heard way back in 1999. I was hooked instantly and have been following them since. And because I love you and them, here’s more!

And there we have a cover (a much better version I might add) of Sinead O’Connor’s “Nothing Compares 2 U” from their Take a Break release. I think you get the idea now. And yes, I also think you are hooked now, too. Oh, you say you might need one more sample before falling completely in love with your new favorite band? Done and done!

Yep. That was “I Will Always Love You” by Dolly Parton. And it rocked. And now so do you because you are now a fan. My job here is done.