The Coolest and Creepiest Tooth Fairies

So, wanna guess what today (August 22nd, stupid) is? If you guessed ‘National Tooth Fairy Day‘, you have a very bizarre calendar and are also, freakishly, correct. So what the hell does that mean, you are doubtlessly asking yourself as you question the validity of a ‘holiday’ created to celebrate that completely fabricated piece of nonsense you tell your kids exists for no other reason that to pay them for doing something nature does for them involuntarily? Hey, calm down. It ain’t like Santa or The Easter Bunny are actually alive somewhere right now either, and the last time I checked parents dole out the bullshit and trinkets on both Christmas and Easter… so why not National Tooth Fairy Day? Huh? Yeah. Think about that one before you go pointing fingers, jackass. Anyway, here are some well-known Tooth Fairies. Man… the things I do for you people.

If you like Chris Noth and really contrived treasure hunts revolving around pissed-off little girls and their parents' failed attempts to remember simple tasks in life, Tooth Fairy is the cute little cinematic ditty for you. However, if any of that sounds humorless and saccharine, well, you'd also be right. Basically what we have here is a dad's relentless attempts to remember to be a Tooth Fairy for his daughter while the pitfalls of fatherhood happen around him. Sweet, but relatively pointless.

Dad, Are You The Tooth Fairy? (book)

When Amazon's own book review sounds so tempting, why bother writing it any other way?

"When Gaby overhears some older kids on the playground saying that the tooth fairy is just make-believe, he goes straight to his father to find out the truth. The enchanting tale his dad tells him of a time long ago when mysterious and magical creatures lived on the earth will delight and entertain children and adults alike."

And the fact that it was written by George Costanza makes it practically epic. 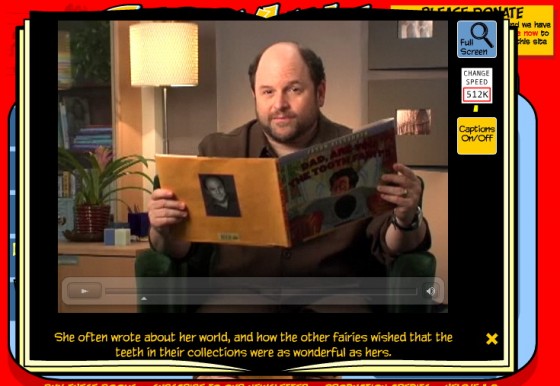 Coming soon to a theater near you is the timeless tale of childhood fairy tales versus the devil. Or something like that... look, I obviously haven't seen it yet, either. It sounds promising though since it features Santa, the Easter Bunny, and the lovely Isla Fisher as the Tooth Fairy going toe-to-toe with 'Scratch' (see? DEVIL) for the protection of the innocence of children the world over. Yeah, I can buy that. Also Santa has his Naughty and Nice lists tattooed on his arms. How could Rise of the Guardians not be cool?

A 150 years ago, an old crone was the village's sole collector of old teeth. That seems gross, but whatever. Anyway, tragedy hit her pretty hard and she ended up getting badly burnt, and was therefore unable to go out in the light (ya know, like will happen), and then she was hanged for being a witch. That is a bad day. So, fast-forward to the future and her vengeance-seeking soul has taken the form of a really pissed off Tooth Fairy who takes out her pent-up rage on anyone dumb enough to look at her, or even be related to people who have! Oh lord, lock down the damn house!

Not gonna even bother writing anything. Just watch. Because this is some messed up shit right here.

As contrived plot devices go, Tooth Fairy has a doozy. Basically, The Rock is a hockey player who has some pretty questionable ethics. So, as a punishment, he has to spend one week as a Tooth Fairy. Yes, because that seems logical and something that would readily happen. So he does his duty, reluctantly at first, until he gets the hang of it and then magical things happen and viola, happy ending. But there really are some very decent comedic moments brought forth by the fantastic Billy Crystal and incredible Stephen Merchant. And, I guess, for the most part, The Rock wasn't too shabby.

Oh but then so much bad happens that it's almost painful. Someone decided that in the direct-to-video sequel, they should hire... Larry The Cable Guy. Ugh, for the love of GOD. Really? Really.

When Tim Allen toppled headlong into the Disney corporation, he apparently signed a contract that he had to make two trilogies: The Santa Clause saga, and the phenomenal Toy Story stories. But it's the Santa films we're discussing here, and, in all actuality, we're not even talking about Tim Allen anymore. Who we are talking about is Art LaFleur who portrayed The Tooth Fairy in The Santa Clause 3: The Escape Clause. So... was this movie any good, and damn it, was Art amazing? Kind of and I forgot. There are your answers.

What? Another horror flick where a Tooth Fairy is the bad guy? Sure, why not? I guess the whole concept of a weird, unseen creature flying into your room in the middle of the night who reaches under the pillow and snatches lost teeth is a tad creepy. Especially when the intended target is a child! What kind of freaky bullshit are we parents laying out for our poor, poor kids? What the hell is wrong with us and our vicious schemes? Sorry. Anyway, in this sadly overlooked and relatively decent horror film, there's a lot of gore, some really silly moments, and a budget thinner than the plot. But hey, Tooth Fairy... am I right?