Could Manute Bol Have Prevented 9/11? 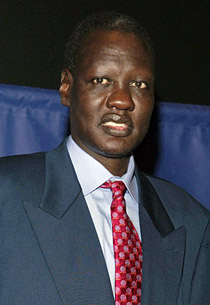 It’s hard to imagine now, but there was a time when the United States did not take Islamic fundamentalism as seriously as it does today.

Manute Bol, who died Saturday at 47, was a 7’7 shot-blocking phenom in the NBA. In 1989, hell broke loose in Sudan as Omar al-Bashir took over in a military coup. Military transgressions led to the death of many Christians in the tribal south. Bol returned to his country, outraged at what was transpiring. This was around the time when the Sudanese government granted a haven to Osama bin Laden, who had been expelled from Saudi Arabia. Bin Laden helped the Sudanese government with its matters, and built up a little club known as al Qaeda.

Bol says he had warned the State Department about the threat in Sudan, but says he was ignored. He also said that he had warned the Clintons about Osama bin Laden. During the last election, he answered without hesitation that he wanted McCain to be president. Why? Because, apparently, Clinton and the Democrats had dropped the ball when Bol was warning them about this trouble in Sudan.

To the United States’ credit, it did list Sudan as a state sponsor of terrorism in the 90s, and barred U.S. firms from doing business there. Sure, in 1998 the U.S. fired a few cruise missiles at Sudan and Afghanistan, but what good did that really do?

Even the Sudanese government saw Bol as a threat, and had lured him back to the country to take part in peace negotiations. When he arrived, they seized his travel documents and he was a virtual prisoner in his own country while suffering health issues. He only escaped back to the United States when the government didn’t want to make an international scene in front of reporters at the airport.

So here’s the question. If the U.S. State Department, the Pentagon, and the Clintons listened to Bol, and taken the absolute necessary action, would the Sept. 11, 2001 attacks have been prevented?

There is no shortage of blame going around for what happened Sept. 11. But one thing is for certain. Had the United States understood the threats and intervened in earlier conflicts, particularly in Sudan in the early 90s, things could have turned out differently. And who knows? Perhaps Bol would have been that person who convinced these U.S. officials of the threat. Watch the videos below, particularly the second one.