Vince Vaughn and Jon Favreau are back, and although this isn’t Swingers, the duo has teamed up with a slew of big names ranging from Jason Bateman to Malin Akerman to Kristen Bell in Universal Pictures’ upcoming comedy directed by Peter Billingsley. Based on a Vince Vaughn original idea, the comedy follows four Midwestern couples who embark on a journey to a tropical island resort. While one of the couples is there to work on their marriage, the other three set out to jet ski, spa, and enjoy some fun in the sun. They soon discover that participation in the resort’s couples therapy is not optional and apparently hilarity ensues. Below are the trailer and poster: 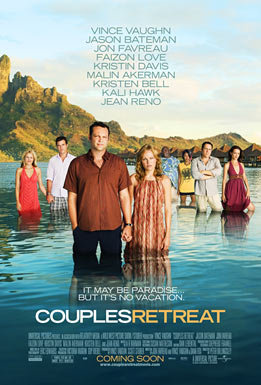