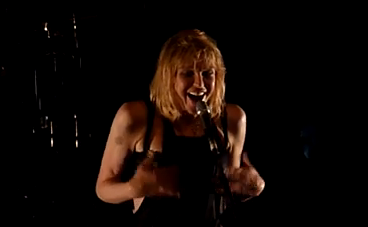 I must admit that when I saw that Courtney Love was covering Pearl Jam’s Jeremy, I thought it actually would sound good. Why? Because Pearl Jam and Hole are Seattle grunge bands that have similar sounds (at least, back in the early 90s they did.)

Friday night, Love put all over Twitter that she was covering Jeremy again in Poland (after playing it in Paris a few days earlier), that she mangled it, and that she wouldn’t stop covering it til she got it right. “Well..we mangled ‘Jeremy’ as a band in Poland yet again.”

Yes, it sounds bad, but it also sounds as if she actually rehearsed it and tried harder, it could actually sound good. That’ll be the day.