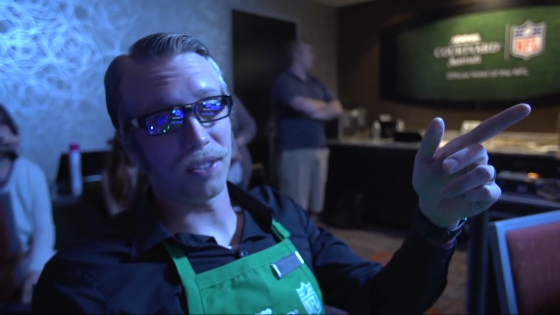 Courtyard is the Official Hotel of the National Football League for the 4th season, and to celebrate that fact, they invited some fans to host their Fantasy Draft at a Courtyard Hotel in Philadelphia. Little did those fans know, Eagles’ All-Pro Quarterback Nick Foles would be serving them during their draft. Foles wore a disguise, but some of the fans noticed a striking resemblance to their cities fantasy star…

Honestly we think Foles would have trouble getting recognized outside of the Philadelphia market even without a disguise, but this was still a pretty cool video. To kick off the 2014 football season, the hotel will be launching new NFL-themed ad spots, a major fan event at the kickoff game in Seattle, contests, guest packages and more! Throughout the entire season, Courtyard will be hosting special fan activities and experiences including tailgates, ticket giveaways and surprise guests. So keep an eye out the next time you stay at Courtyard, you never know who will be behind the counter when you check-in.