Sports > Other > Covering the Coverage

An aspect of “New Media” that fascinates me is covering the coverage. Now that its easier than ever to have a voice, old media finds themselves the subject of public conversation far more often. It comes in many forms, and has become a staple of great new media content, especially in sports. Sites like Puck Daddy or Kissing Suzy Kolber regularly dip into commentary on the mainstream media’s treatment of various stories and events. Other sites such as the recently resurrected Awful Announcing make it their entire purpose. That’s a niche that newly launched (and brilliantly named) Press Coverage finds itself filling as well.

Dan Levy has hosted a Podcast for a couple of years, and for a while maintained a column at the Sporting Blog by the same name, Press Coverage. Now he has brought together an impressive list of New Media folks for the purposes of covering the coverage, and has made it his full-time gig. His columns and his podcast largely focus on those issues, of the media, the ethics, the story behind the story, and everything else that you don’t typically get from your main stream sports sources. 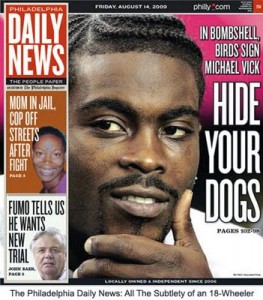 We’re competing against Dan in the P&G Blogger Fantasy League, so he invited me on his show, to discuss that and other topics related to the business and ethics of running a website such as Gunaxin. The show is only about 40 minutes long, and if you can stand my voice for that long, I think you’ll find it an interesting listen. We even delve into the moral implications of making a waiver claim on Michael Vick in an attempt to win your fantasy league. If you appreciate that type of content, mixed in with great general sports discussion, then I think you should give his podcast a regular listen.