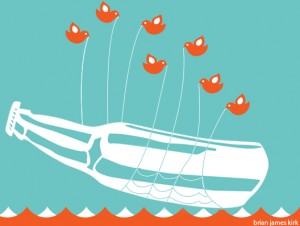 I think anyone who has been around a computer or television in the past month has probably heard of twitter by now. I don’t know what happened, but recently everyone has been all a “twitter” about twitter. Heck, you can even follow Gunaxin if you are that mentally unstable. Well, craft brewers are no different then the rest of the world, and they have been flocking to the service as well. The fine folks at Beernews.org have been working feverishly to keep a list of Craft Brewers up to date, and the list currently boasts 172. I don’t really know what Craft Brewers will be tweeting about, but they probably wonder the same about us. I imagine it goes something like this:

@craft_brewer That beer was great, you should buy some from us.