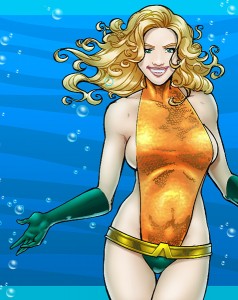 I think many men can appreciate a good female superhero. Be it Wonder Woman, one of the female X-Men, or something in the video game world like Lara Croft. What guy doesn’t want to see a women kicking ass? I mean that was the central premise of Buffy the Vampire Slayer and Alias on television. And I enjoyed those shows.

But imagine if some of your favorite heroes were women? Not just Wonder Woman, but let’s say The Flash or Daredevil. Guess what? People already have. Individuals like Portal Comic and Elsa Chan have come up with depictions of female version of various characters, be it from comics, video games, or even the movies. And I’m not talking about Batgirl or Supergirl. I’m talking about characters like the female Aquaman to the right, or Aquawoman if you will. And there are plenty of other examples. The results might intrigue or disturb you: