The Heroes Project is Crown Royal’s commitment to give heroes at home and abroad the recognition they deserve. From firefighters and police officers, to local volunteers, Crown’s pledge is to give back to these individuals and their communities.

Each year, Crown Royal awards naming rights to the NASCAR Sprint Cup Series race at Indianapolis Motor Speedway to a deserving American Hero. Through a special unveiling of a custom-made Gibson guitar sporting the official race logo, Green Beret John Wayne Walding was recently introduced as the program winner. Come July, thousands of NASCAR fans will travel to the Crown Royal Presents John Wayne Walding 400 at the Brickyard Powered by BigMachineRecords.com, where Walding will receive a VIP at-track experience and hand the trophy bearing his name to the race winner in Victory Lane. 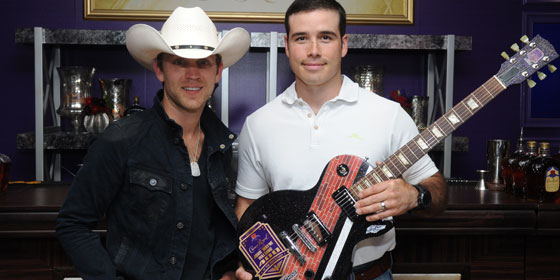 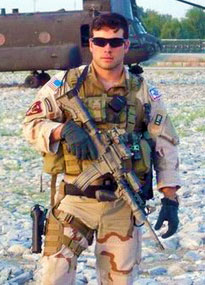 John Wayne Walding, 32, of Little Elm, Texas, served in the United States Army for 12 years with seven of those years being in the 3rd Special Forces Group, completing tours in Afghanistan and Iraq. Despite losing his lower right leg while serving overseas, Walding was the first amputee to graduate Special Forces Sniper School. This decorated veteran was nominated by his brother because of his continued efforts to provide guidance and inspiration to fellow service men and women. A big NASCAR fan, Walding has never had the opportunity to go to a race and looks forward to attending the John Wayne Walding 400 in July.

While Walding is being honored, and NASCAR’s best drive around in circles, 12 digital media influencers will be competing to Capture the Crown. Capture the Crown is one of our favorite events of the year, and despite failing to secure victory at the Brickyard last year, we’ve entered the fray once again. This is the 4th year that Crown Royal has held the epic contest, and we’re proud to say we were victorious at the inaugural event back in 2011. The competition is essentially an epic experiential scavenger hunt that takes place at one of the biggest NASCAR races of the year. This year we have to earn our way to the main event though, which is where we’ll need your help.

This week we were sent a bottle of Crown Royal Black and charged with gifting it to a Hero, while recording the occasion for a social media competition. Certainly we know some people very deserving of such an honor, but we saw it as an opportunity to commit a random act of kindness, and decided to take a road trip down to the World War II Memorial in Washington, DC. While there weren’t any World War II Vets present during our visit, we did run into a large contingent of Veterans from a Navy Submarine, the USS Francis Scott Key. 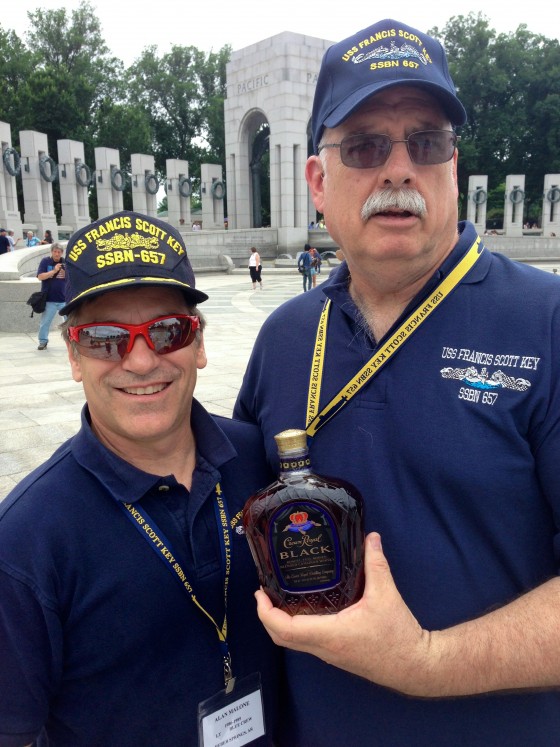 The men all served on the Benjamin Franklin-class ballistic missile submarine sometime between 1965 and 1993, and were in town for a reunion. Since Gunaxin is based near Baltimore, and this year is the Star Spangled Banner’s 200th Anniversary, we felt this chance encounter was meant to be. After shaking some hands and thanking the men for their service, we found a gentleman most appreciative and deserving of our whisky gift, Jeff Burke of Charleston, SC, who was a member of the Key Crew from 1985-1988. He assured us that the bottle of Crown Royal Black would be shared with his shipmates and be empty long before the TSA could confiscate it from his carry-on.

It’s not easy living in a submarine, especially not for a man of Burke’s size. So please join us in thanking Burke and his shipmates for their service, and raise a virtual toast to these Heroes with a ReTweet of their Photo on Twitter.