Sports > Other > Crown Royal Presents The Matthew and Daniel Hansen 400 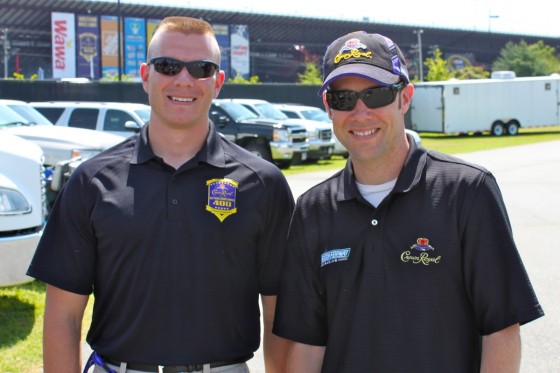 This weekend I had the privilege of being invited to Richmond International Raceway by the good folks at Crown Royal. The race was named in honor of Matthew and Daniel Hansen, twin marines :

A contest awarded them with naming rights to the NASCAR Sprint Cup Series race on Saturday, April 30, officially titled, “Crown Royal Presents The Matthew and Daniel Hansen 400.” Traditionally, the race has donned only the name of the contest winner, but this year’s race will recognize Matthew, as well as his identical twin brother and fellow Marine, Daniel, who was killed in action on Feb. 14, 2009.

The focus was squarely on the Military at this event, and Matthew Hansen and his wife were truly treated like Royalty by the folks at Crown. Considering what transpired on Sunday, I feel so privileged to be part of such a great tribute to our Military. It was a very eventful weekend, so we’re going to break our coverage up amongst a couple of posts, this one focusing on the race itself. For me, this was my first NASCAR race, so being the aspiring photographer that I am, I decided to capture the setting as best I could in photos.

We had great access at the event, to Matthew Hansen, Matt Kenseth, Rodney Atkins, pre-race festivities, and even had a hot pass to get into the pits during the race. One thing we didn’t actually have a full handle on though, due to running around all night is everything that happened during the actual race. You know, what you would see if you were home watching it on TV. So I found this video which did a nice job of catching me up :