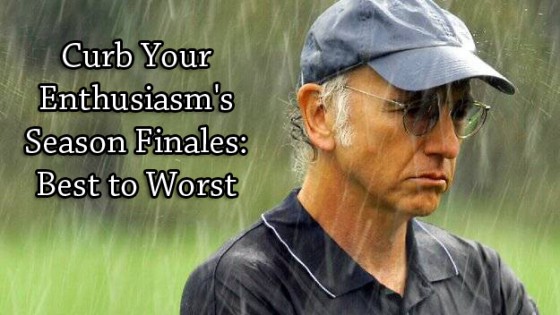 Larry David’s Curb Your Enthusiasm starts its eighth season this Sunday night. David said in an interview with us last year that he always aims for each season to be the last, and won’t announce when it will end to spare himself the pressure of prepping a typical series finale. This is likely a lesson he learned when Seinfeld‘s series finale got a meh rating from longtime fans.

But it’s got to end sometime, and each season finale could have easily been the series finale had David decided so. Let’s now rank the season finale endings, from worst to best.

While donating a kidney to Richard Lewis, Larry dies and goes to heaven, but gets in an argument with his guardian angels (Dustin Hoffman and Sacha Baron Cohen) over DVD covers and is subsequently sent back into his body.

Theoretically, this episode tied up all the loose ends and could have ended the series, but it would’ve been a disappointment.

Cheryl is cast in the The Vagina Monologues; Larry runs into an old girlfriend who asks him to go to an incest survivors group with her which – coincidentally – is attended by the director of the show.

Season 1 didn’t have a story arc and the final episode didn’t tie anything together, but Larry pretending to be an incest survivor and having his falsely accused uncle walk in to meet the director led to major laughs.

Since it was only the first season, we didn’t expect this to be the series finale.

Larry opens on Broadway with The Producers and forgets his lines during the performance, while Cheryl reminds Larry to cash in on his present before “midnight” of the opening.

Of course opening night was the final episode of the season, but it dragged on as it showed too much of the actual show. Larry winning back the crowd with lame stand-up was hardly believable, but learning that Mel Brooks was trying to sabotage his own show by casting Larry was certainly good for some chuckles. Larry on stage motioning to Cheryl that he still had a few minutes left to cash in on his “sleep with another woman” anniversary gift wasn’t overly hysterical, though the season itself had massive laughs as Larry kept failing.

Again, this episode tied up all the loose ends and the series could have ended here, but it would’ve been a disappointment.

Larry tries to win back Cheryl by writing her into the Seinfeld reunion script, and succeeds, ruins the moment by noticing it was her all along who was placing drinks on the table without a coaster, and proceeds to tattle on her just as they reconcile.

Though all the loose ends were tied up, and we got to see a Seinfeld reunion, something told us that this would definitely not be the final episode. This video isn’t the full ending, but does contain the aired Seinfeld portion.

Celebrating a deal with CBS, Larry takes Cheryl out to a restaurant and keeps trying to bring food to the limo driver, gets caught stealing a fork and is sentenced to wear a sign outside the restaurant.

While this episode ends hilariously, we knew this wouldn’t be the end of the series.

Like Larry’s punishment at the end of Season 2, Season 3’s cursing brigade would be a finale to remember but something told us it wouldn’t be the end. Too much else to cover.

Larry uses Jeff’s daughter’s Bat Mitzvah to clear up a nasty rumor, then falls in love with Loretta and seemingly lives happily ever after with the Blacks.

The series could have ended here and I would’ve been satisfied. The final montage of Larry as a family man with the Blacks is utterly hilarious. Sure, there’s no way he’d really ride off into the sunset that way, but the laughs he delivers are better than any season finale in either Curb or Seinfeld.