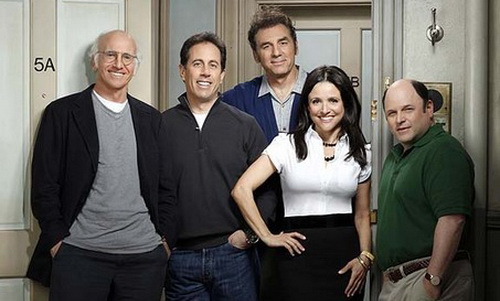 The last time we saw Larry David on HBO’s “Curb Your Enthusiasm,” we fell out of our seats laughing as we watched an utterly hilarious montage of Larry living with the Black family, disciplining misbehaving kids, talking loudly in a movie theater, tossing popcorn around, Larry being everything that he once despised. Had the series ended there, at least we wouldn’t have been disappointed with a relatively ‘bad’ episode that so many comedy series have delivered upon departure, Seinfeld included.

Here is what’s vastly different about the seventh season of Curb: The expectations. In each of the previous seasons, we didn’t really know what to expect, other than laughter. It was Larry being Larry, and each season ended with an episode that tied things up nicely, whether it was the opening of a restaurant, Richard Lewis getting a kidney, the opening of The Producers, or pitching a new sitcom. But now, we’ve got the Seinfeld ‘reunion,’ and anything short of David delivering classic comedy this season will be a disappointment.

There are good reasons why there should never be a ‘real’ Seinfeld reunion, even after the relatively ‘bad’ final episode where they all went to prison. So, what I’m assuming will be a shot at delivering a Seinfeld reunion episode on Curb (does anyone actually believe it’ll work out nicely by the season’s end?) sounds like the best way to go about giving longtime fans what they want without actually writing a ‘real’ Seinfeld script and showing it on NBC.

Larry, you rarely disappoint, and when you do, you redeem yourself and more deeply etch your name into the comedy wall of fame. But this season, we’ll be watching enthusiastically, wanting to laugh harder than ever.