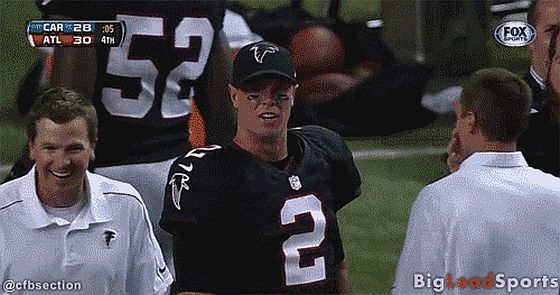 Being an NFL quarterback isn’t easy. You have to avoid being crushed by 300 lb. defensive linemen while leading the offense to one scoring drive after another. Your every success and failure is magnified by TV cameras, 70,000 fans and 1000 sports writers and bloggers ready to attack your every flaw. You are the only player on the field judged by team wins and losses and the most popular guy on the team is often your backup.

All that is to explain what may have been on the minds of two of the NFL’s biggest stars when they were caught on camera this past weekend using language that is usually off limits.

First, Tom Brady was caught saying “Fuck you bitches” to the Buffalo fans after an appeal. While players of his standing should know better, Brady will get a pass, as the Patriots outscored the Bills 32-7 after he let loose with the explicative in the 3rd quarter.

While Brady’s moment was motivated in part by frustration, Atlanta’s Matt Ryan’s was out of pure joy. After a late drive led to a game-winning field goal, Ryan was caught on tape telling the Panthers to “Get the fuck off my field.”