Cyrus on Blu-ray and DVD 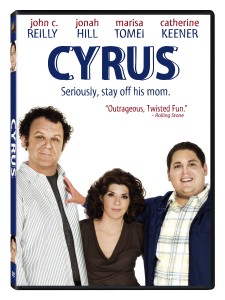 One thing about movies is that they can give us some great catch phrases. Cyrus has a pretty damn good one! If you have seen the film you know exactly what I am talking about. For those who haven’t, well, spoiler alert. Not that this is a spoiler, but for those people who don’t want to know anything about the film before they see it, you’ve been warned. So, if you’ve heard, “Seriously, don’t fuck my mom,” then it was probably from someone who has seen the film.

John C. Reilly (John) and Jonah Hill (Cyrus) go head-to-head in the ultimate smack-down in this irreverent and original comedy. Cyrus has some great laughs with perfect awkwardness and impeccable comedic timing. The film also stars Marisa Tomei, who plays as Cyrus’s mother, Molly. John wants to date Molly and that does not bode well for Cyrus. This is where the awkward fun begins. If you’re a fan of Step Brothers or Superbad, then you’ll enjoy the comedy from both Reilly and Hill.

Cyrus comes to Blu-ray and DVD  today, December 14th. The disc includes two exclusive alternate scenes, “Cyrus at Party” and “Puppet Movie.” The film will be available on Blu-ray for $39.99 and DVD for the $29.98. You can pick up the film at the Fox Store or at Amazon.com. Plus, just follow us on Twitter for your chance to win a DVD copy of Cyrus.