The saga of Danica Patrick’s missing tattoo continues this evening, as we have new updates to report. When we first prepared our post of Danica in the 2008 and 2009 Swimsuit Issues on Friday February 13th, we noted then the fact that her tramp stamp was missing. We then followed it up with a more detailed exploration of that issue on Monday. Well even more information has come to light, so we felt it was time we update our readers on the latest.

Darren Rovell of CNBC caught wind of our find, and took the investigation further. Apparently he has SI and Danica Patrick on speed dial, and was able to gather the following information:

Sports Illustrated acknowledged that the tattoo, on the small of her back, was taken out, but a spokesman didn’t comment as to why it made that editorial decision. Patrick’s tattoo was in the issue last year. As for Team Danica, it seems like they’re fine. “Danica is aware of the edits and is comfortable with the final photos,” BNC’s Lewis Kay told us.

So while everything seems kosher, as the parties agree it is a non-issue, we still wondered about this incident. As I mentioned before, you can debate the classification of Danica’s ink. Body art depicting an American Flag may exclude it from being classified as a Tramp Stamp. To me that is one thing that makes this situation so interesting. Did Sports Illustrated not give a second thought to the idea of editing out an American Flag from a model’s body? In addition, Darren notes that the tattoo appeared in last year’s Swimsuit Issue. While we have confirmed by looking at our own copy that you can see it, it certainly wasn’t featured prominently. We did however find photos on Sports Illustrated’s website from last year’s shoot that have also been edited. Compare the two images below (image links to the SI Page)

So why would some images be edited, while others were not? I will also note that whoever edited SI’s photos this year did a much better job of making Danica look hot than last year’s photo editor. That is unless of course Danica has been working more on her figure and tone than she has on her driving recently.

We previously posted photos of the tattoo, but tonight we have an update for you on that as well. Through our extensive research (hours of looking at photos and video of Danica online, tough job) we were able to acquire some additional images of higher resolution, which show the tattoo in question more clearly. Cropped images of the ink appear below, along with the graphic that we previously posted which does not appear to match exactly, but is quite close.

So while that is what Danica’s tattoo previously looked like, upon further inspection of the video, it looks like she may have added to her body art. The screen capture below was taken from the official photo shoot video. Notice that the image appears to have something dark added to each side of the flags which is taller then the original design. Anyone care to venture a guess as to what she has added? Maybe this is why the tattoo is suddenly more offensive in this years issue?

** UPDATE **
Well apparently we were right about the addition to Danica’s Tattoo. In an interview with FanHouse, she states :

“Mine is a checkered flag-American flag with some angel wings and some stars and stuff. It’s a two-part thing, I got the first half of it when I was 19 and I got the rest of it just a few months ago.”

In addition, Darren Rovell has reached Sports Illustrated for comment :

“The Swimsuit Issue emphasizes natural beauty,” the spokesman told CNBC. “The freckles are left on and, in this case, the tattoos came off.”

I am not sure I am really buying that explanation, when it is obvious that other “enhancements” have been done to the photos. “Natural” doesn’t seem high on the priority list to me.

I know what you are thinking at this point, “dude, stop with the cropped images, let’s see the goods!” So for your own inspection, below are links to the high-res photos which give a clearer picture of that now famous tattoo: 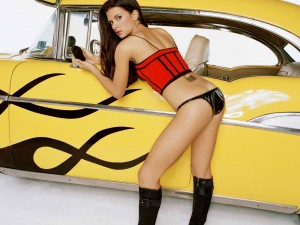 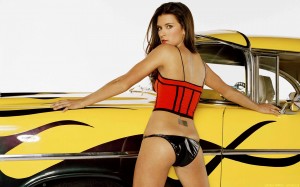 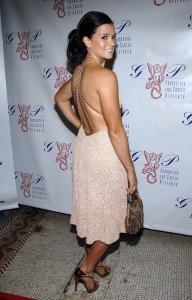