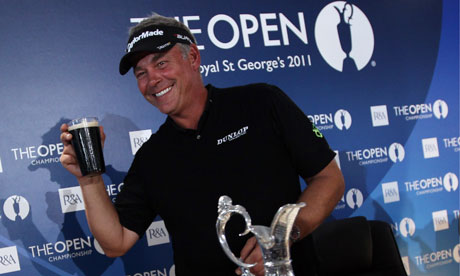 Before the start of the 2011 British Open, golfer Darren Clarke was asked to do color commentary for the event by ESPN after his opening rounds were through. The only problem for ESPN was Clarke had two pretty good opening rounds at Royal St. George which eventually ended up by him holding the cleric jug.

The 42-year old Irishman did what was needed to pull one of the most unlikely wins in recent golfing memory. It wasn’t that Clark isn’t a great golfer, he was in this position before to win the Open Championship back in 1997 when a couple costly shots from a bunker sealed his fate. It’s just that, there were other players who were supposed to be better than him. Rory Mcllroy was supposed to cement his legacy as the air-apparent to Tiger Woods. Phil Mickelson who kept pace with Clarke on the final round was supposed to claim his first ever Open Championship. Dustin Johnson who came so close to winning a major championship before but to be bested by better players and bad luck was right there ready to claim it. However, Clarke at the end of the day, cemented his own legacy.

Clarke was already a well-know face on the European Tour and even bested Tiger Woods during the Match Play championships back in 2000 but like many golfers, he was still looking for that signature win. His play was consistent throughout the tournament and as other players failed to break through, Clarke lied in wait ready to strike. He wasn’t amazing but he did what was needed to keep pace during the event and learned from his previous mistakes in losing the Open Championship. He had been there before and was ready to take the chance if it was afforded to him. Clarke’s life has had tragedy in recent memory, after losing his first wife to breast cancer, he dedicated his  victory in the Open to her memory along with his two kids.

Nearing the 18th hole and carrying a rather sizable three shot lead, Clarke seemed to walk from the tee like he had done it countless times before but there was something different about this time. Even when his final shot came up three feet short of the hole, Clarke smiled at the crowd as to almost say, “It’s supposed to end like this, huh?” When golfers are getting more athletic and hitting the ball to the far reaches of the universe, Clarke reminded us that the game of golf isn’t just how far you can hit it or how many majors you’ve won but it’s about who has the guts and determination to win. That’s what many countless golfers do when they take up the sport and his victory is one that many weekend warrior golfers can relate to.

Clarke’s victory wasn’t one of flash or domination but that isn’t the type of golfer or person he is. For Darren Clarke, his one shining moment was a few days in Royal St. George where he proved that the ordinary golfer can win majors too.