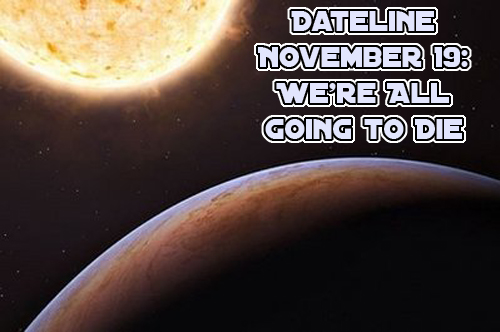 Guess what was just discovered right outside the door of our own Milky Way Galaxy? If you said a giant planet poised to devour our own like some kind of monster out of a comic book, you’d be precisely half right! Scientists have just discovered a planet just outside our very own galaxy that’s just a tad bigger than Jupiter, our resident monstrous gas giant. This new planet, also a gaseous behemoth, was somehow missed over the past few hundred years -or for as long as scientists have been studying this kind of stuff- and just now recognized orbiting a star so strikingly similar to our own that it’s showing us what our sun will do in a few million years. So… we didn’t know this big ass planet was even there? Right outside of our galaxy a mere 2,000 light years away? That’s like missing Louie Anderson hiding outside your back door in the hedge. Or, not very likely. Well, here’s the skinny from Yahoo.com:

WASHINGTON (AFP) – A hot, gaseous and fast-spinning planet has been found orbiting a dying star on the edge of the Milky Way, in the first such discovery of a planet from outside our galaxy, scientists said Thursday.
Slightly larger than the size of Jupiter, the largest in our solar system, the newly discovered exoplanet is orbiting a star 2,000 light years from Earth that has found its way into the Milky Way.
The pair are believed to be part of the Helmi stream, a group of stars that remains after its mini-galaxy was devoured by the Milky Way some six to nine billion years ago, said the study in Science Express.
“This discovery is very exciting,” said Rainer Klement of the Max Planck Institute for Astronomy.
“Because of the great distances involved, there are no confirmed detections of planets in other galaxies. But this cosmic merger has brought an extragalactic planet within our reach.”

‘Exoplanet’ sounds highly dangerous to me. It sounds like ‘Unicron’ or ‘Galactus’… ya know, those PLANET EATING things! Yeah, I also don’t like how this was just conveniently discovered! How much you wanna bet these scientists knew all about this and have already sworn allegiance to the overlords who are KNOCKING ON OUR DOORSTEP! Look, I’m all for the discovery of new stuff out there in space, but I’ve seen Star Wars and I know a ‘fully operational battle station’ when I see one. Anybody got a X-Wing?