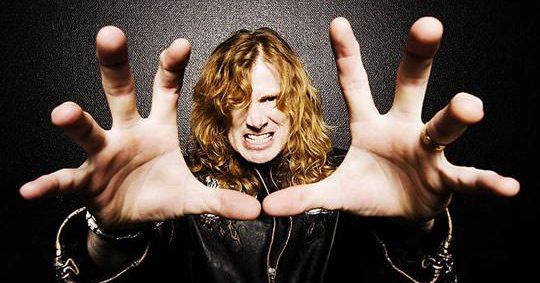 Dave Mustaine, who had been drinking, poured a full can of beer down the neck and into the pick-ups of Ron McGovney’s (former bassist of heavy metal legend Metallica) bass. When McGovney tried playing it, he received an electrical shock which he claims ‘blew him across the room and shocked the hell out of him’. Shortly after the incident, Dave Mustaine (lead/rythm guitarist, main songwriter, and vocalist for Megadeth) was fired from Metallica. In 1983, he concluded that one of his goals in life should be to create a band more successful than Metallica.

Fast forward to March 16th, 2010, Megadeth was scheduled to play at Rams Head Live in Baltimore, MD. When the time came to begin their set, Mustaine appeared on stage, grabbed the microphone, and let his narcissistic side show by blaming a long delay on promoters and stomped off stage:

Mustaine and his band finally took the stage after an hour and a half delay due to a blown soundboard. Unfortunately the technical difficulties continued as Mustaine later claimed a fan threw a beer at the newly replaced soundboard, thus ending the show. I said claimed because from the second they started playing, till the third song where they ended the show, the sound quality was simply horrible. All the sound was coming from the stage monitors, and the main PA would occasionally kick in with loud bass and humming sounds. The booing crowd brought shock and abandonment to Mustaine, who stopped playing and canceled the show:

“Last night was a difficult night for me, Megs, and for our sold-out audience of Megadeth fans in the great city of Baltimore. You see, we were plagued with equipment failures, the ensuing delays getting on-stage (Axl Rose, I am NOT), and the lack of intelligence of the fan who was convinced that throwing his beverage on the console, thus ending our second attempt at taking the stage last night, was an intelligent thing to do.”

After nearly 30 years, Mustaine’s goal of surpassing the fame and success of Metallica is a joke. Many say that anything is possible if you put your mind to it…. unless you’re a narcissistic unintelligent asshole. Dave Mustaine, a man who could have had it all, is the last person who should be calling a fan unintelligent over a spilled beer. I bet Dave Mustaine wishes he had a bit more intelligence when he spilled his own beer back in 1983.