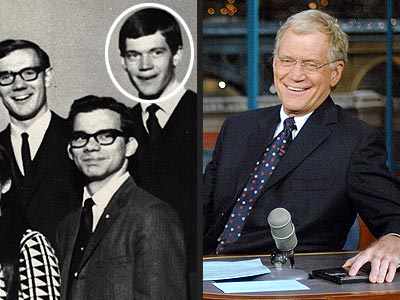 Actually, when you think about when he was coming up as a comedian it makes sense that David Letterman would be on a ton of game shows. People under the age of 30 have no idea how prevalent game shows were in the 70s and 80s. Let’s try to put in a way you can understand.

Flip through your basic cable channels from 10am-2pm and count the reality shows. Now pretend you only have 5-10 TV stations to choose from, and all they are showing during that same time period are games shows, and a half hour for news. With only slight exaggeration that’s how it was. This was the TV world David Letterman got his start in, and like anyone as ambitious as he, he did what he needed to get his shot by going on any and every crappy game show he could.

Sadly, most of the clips are not available on the internet. You are denied the glory of David Letterman on Hollywood Squares. We are left with these five. In all of these you do not just see someone that resembles the Dave you know and love, but you can tell he really hasn’t changed much.

The sad truth of The Gong Show was the real talent was performing and the no-talent hacks were on the panel. In 1976 David Letterman was not viewed as talented enough to perform.

Dave was lucky enough to appear with Dick Clark on the “Greatest Game Show of All Time.” And no, this title is not up for debate. It’s nice to see Dave had a way with women even back then.

A world in which Dave became a Game Show Host instead of a Talk Show Host would be 2nd best, but it would not be much of a sacrifice. It would have been different, but he owned as Game Show Host.

A note to younger readers: the Dodgers used to play in Brooklyn. And back in 1978 there were still people alive who remembered them playing in Brooklyn, thus making this jacket an issue. Add in the fact that NYC was much more crime ridden and dirtier and you can fully appreciate the joke.

The best thing about YouTube is the unaired pilot. A man could make a living on that alone. This one is pure Dave.  Dave + Woman + Sexual Innuendos = Comedy. (It also equals sexual harassment, but at least we know the man we see on camera is the same guy when the cameras are off.) It’s also nice to see that he had a reputation even this early in his career.

Battle of the Network Stars
1978

It would be criminal to not include this. Watching Dave get beat in a footrace by a woman no one has heard from since.

A big hat tip to WFMU‘s Beware of the Blog. Their piece on Letterman is really good, and worth the time to read.