Motors > Cars > A Day at the Races with Kia Racing

A Day at the Races with Kia Racing

In September, Kia Motors claimed the 2014 Pirelli World Challenge (PWC) Grand Touring Sport (GTS) and Touring Car A (TC-A) Manufacturer Championships at the series’ season finale. Kia Racing and their partner Kinetic Motorsports competes with a pair of turbocharged Kia Optimas in the Grand Touring Sport class, and two Kia Forte Koups in the Tour Car A class. Both vehicles are proud to boast championship seasons in 2014. 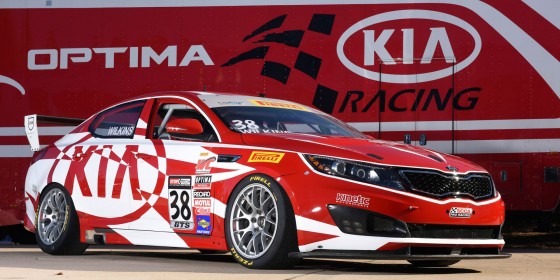 To celebrate the dual championships, Kia Motors brought the sights and sounds of the race track to the 2014 Specialty Equipment Market Association (SEMA) Show in Las Vegas, and unveiled the new livery for the 2015 season as seen in the image above.

Kia’s “A Day at the Races” 2014 SEMA display commemorates Kia’s racing success and demonstrates the imprint motorsports has left on the brand’s DNA, encompassing both the thrill of high-speed competition as well as the fun and excitement that fans experience track-side. 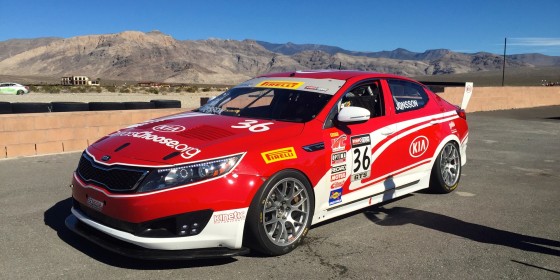 We were delighted to spend a few days in Vegas recently having fun with Kia Racing, both at the SEMA Show, and out at the track with the championship winning vehicles. We made our way to the Spring Mountain Motor Resort in a new 2015 Kia Sedona. It’s not a sports car, it’s a Sedona. But that didn’t stop Kia from taking it on a test track in a recent commercial. 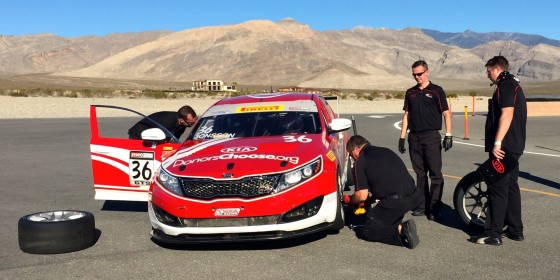 Upon arriving at Spring Mountain, we were given an overview from the racing team, covering some of the technical aspects which help make them competitive on the track against teams from Ford, Chevrolet, Porsche, Aston Martin and Nissan. We then had the opportunity for a thrilling ride along in the No. 36 DonorsChoose.org Optima turbo, with Kia Racing drivers Mark Wilkins and Nic Jönsson.

Kia Racing finished the stellar season with 13 podium finishes, including 5 race wins. Meanwhile, the turbocharged Optima race cars led more on-track miles than any other manufacturer in the class this season, a testimony to the speed and reliability of the Kia Optima. 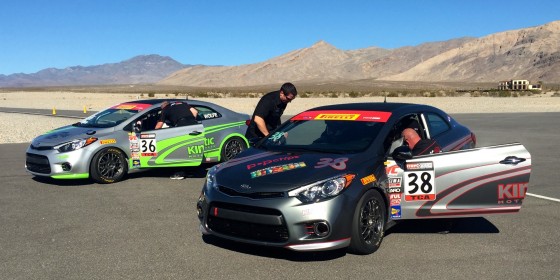 After a fabulous lunch, we had the opportunity to get behind the wheel of the racing Kia Forte Koups. This pair of race cars is about as stock as you can get in the competitive racing world, and were surprisingly capable and easy to drive. Modifications included exhaust, brakes, shocks and the necessary safety features. Unnecessary weight was removed, stickers were slapped on the side and now you have the formula for making a relatively inexpensive, fun to drive, championship winning race car. 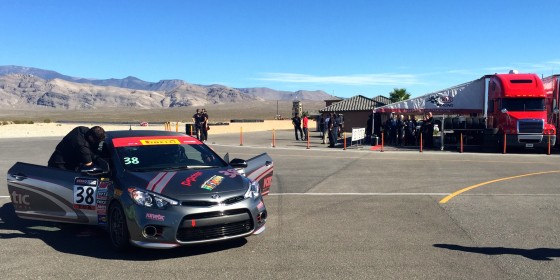 Rookie driver, Jason Wolfe, piloted the No. 36 Richard Wolfe Trucking Kia Forte Koup to four wins and 10 podium finishes in 2014. That was enough to secure him the PWC Driver Championship and Rookie of the Year honors. He’ll be thankful to know that we didn’t get sick in his race car, but we had a hell of a time at the track. Overall we’re impressed with what Kia has been able to do in the world of manufacturer racing in just a few short years. They believe a strong showing in motorsports will help to raise consumer perception of the brand, and we think with results like these, it certainly can’t hurt. 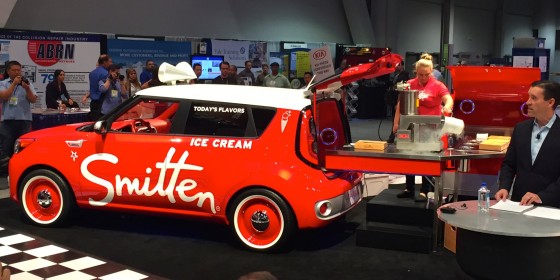 Back at the Las Vegas Convention Center, a trio of custom-built Kia vehicles were turning heads on the SEMA Show floor. We previously published a list of our favorite things seen at SEMA, but we limited ourselves to only one vehicle per brand for that list. Honestly all three of the custom Kias that we’re about to highlight below were among the most exciting things we saw at the show. The first two even gave out free samples of Beer and Ice Cream! The only faster way to attract attention at an auto show is to employ beautiful women to answer questions, and they did that too. 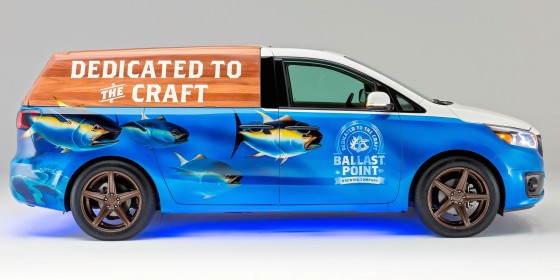 One of the most heavily modified SEMA vehicles Kia has ever produced, the Ballast Point Sedona takes infield fun during a day at the races very seriously. Serving the premium, handcrafted beers from Ballast Point Brewing & Spirits, the steel roof of the Sedona has been completely redesigned to echo the nautical theme the specialty brewer is known for.

Built in partnership between Kia and Ballast Point, following the SEMA show, this Sedona will serve as a fully functioning marketing display vehicle for the San Diego-based craft brewery. When not on tour in 2015, it will be on display at Ballast Point’s flagship restaurant and tap room in San Diego, California. 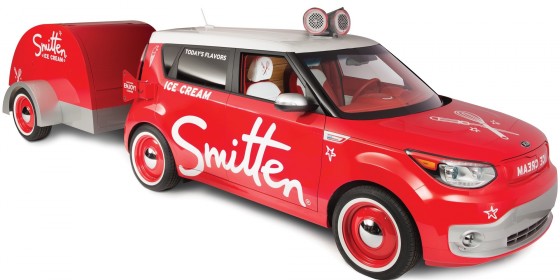 Ice cream is always a favorite at racetracks across the country, and few vehicles are as iconic as the classic ice cream truck. For its more modern take on the musical, treat-serving truck, Kia teamed with San Francisco-based Smitten Ice Cream, matching up its high-tech zero-emissions Soul EV with Smitten’s high-tech patented Brrr™ ice cream machine.

Fun Detail : “Ice Cream” reverse decal on the front, like an ambulance

Kia and Smitten Ice Cream have partnered to create a Soul EV that’s as unique as Smitten’s deliciously fresh-frozen treats.  Following the SEMA show, the street-legal Smitten Soul EV will operate as a catering/marketing display vehicle for the Smitten Ice Cream Company. 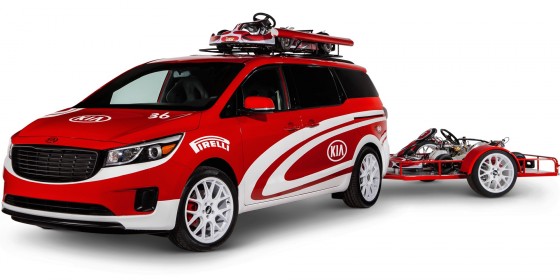 Karting is how many of today’s top professional race drivers got their start and this all-new 2015 Kia Sedona has been transformed into the ultimate kart hauler. Painted Kinetic Motorsports Red overlaid with vinyl graphics that pay tribute to the championship-winning Kia Racing Optimas, the Sedona sports matching 20-inch BBS CH-R white powder-coated wheels mounted with Pirelli P Zero rubber.

At our farewell dinner in Vegas, we sat next to Kia Racing driver Nic Jönsson, who raved about the Ultimate Karting Sedona. He began his racing career at a young age in a cart, and now has a son who is doing the same. Hopefully this awesome vehicle will find a good home at the track with Jönsson and family when it is done making the auto show circuit.