Media > Movies > Daybreakers: It’s All About the Blood

Daybreakers: It’s All About the Blood 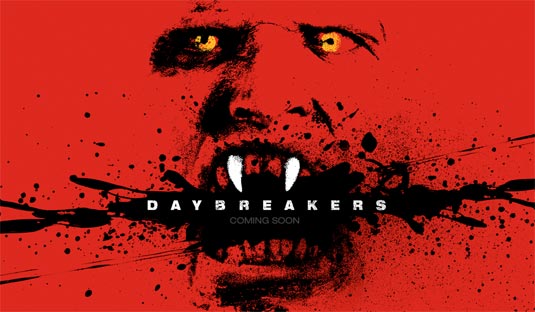 So this past Friday, January 8th, I dragged my wife out to see Daybreakers. You see, she is a die-hard Twilight fan and nauseatingly obsessed with sparkling vampires and broody, morose tweens who couldn’t act their collective ways out of a wet paper bag. I, on the other hand, am a classic horror movie aficionado who believes quite stolidly that not only are vampires not emo pussies, but also not vapid dolts who can’t even change their facial expressions. My wife understands this, and I (though with deep sighs) understand her slobbering desire to be swept away by Edward and made immortal.  Yet, we both agreed to go see Daybreakers together and see (at least for herself) how real, true-to-mythology vampires behave. This is a fun, fun ride.

Part One: Okay, we get it: They’re VAMPIRES!

From the onset, we see that the entire populous of Earth has been either turned into Vampires, remained human and running, remained human and being farmed for blood, or become a Subsider living under the city like a half bat/half vamp. Yeah, it’s a little confusing. You see, if a vampire goes for too long without human blood, it becomes basically a feral vampire de-evolving into a bipedal bat of sorts, and immediately gets shunned to the sewers. On the other hand, if a vamp consumes the blood of other creatures, they still retain their ‘human’ characteristics and regress far more slowly just like Ed (Ethan Hawke), the main protagonist who also happens to be a hematologist working for the biggest blood supplier on earth trying desperately to come up with a viable replacement for human blood. Which brings us to the two remaining human factions: those on the run trying to fight the vampires, and those hung like meat in the supplier’s huge storerooms supplying blood to the wealthier vampires… and it’s running out. All of this aside, the entire world is now inundated with ads and commercials just as it is now, except everything is catered toward the fanged ones. It’s a point that’s literally pounded into your head while you watch. 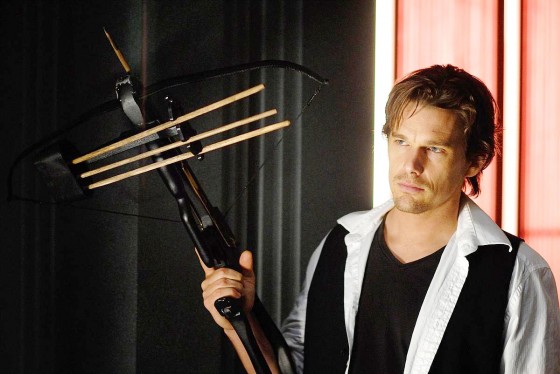 Part Two: So, what does this Ed do, anyway?

Ed works for Charles Bromley (an always amazing Sam Neill) at the very company that is supplying the world with their delicious blood. Unfortunately, the supply is running out as the last remaining pockets of human ‘donors’ are dwindling. It’s up to Ed and his staff to locate a stable and useful solution by coming up with a non-human synthetic blood. Yet, on his own, he has decided to stop consuming human blood as he begins to feel slightly sympathetic. Soon he meets up with a small pocket of resistance under the leadership of Elvis (Willem DaFoe. Easily the greatest part of the movie) Elvis was once a vampire, and, somehow, managed to change himself back to a human. What? Is this even possible?

In an interesting twist to the Vampire mythos that I doubt has ever been explored, it seems that a temporary blast with pure sunlight (as in the UV rays) can not only kill the ‘virus’ but also kick-start the living dead’s heart thereby rendering him or her human once again! And you know, it’s only slightly convoluted and no more so than any other method from the myriad other Vampire movies over the years. And it even looks cool! See, one day, back when Elvis was first turned, he began working for the vampire populous re-engineering their vehicles with the necessary things for them to be able to drive during the day; installing cameras, UV proof windows, self-inflating tires. But, he got fed up and decided to end it all by sun-style suicide. Well, in a weird freak car accident, he did just that, but the burn was quickly extinguished as he landed in a river. Not only was he not a pile of blackened bones, but he was also not un-dead anymore. Basically, he was human again. Ed hears this and figures a way with an unused wine tank to try it on himself.

Part Four: The ending of which I am not revealing. Sorry.

Well now we all know that there is a proven cure. But, will it work on Ed? Is this the saving grace the world needs to rid themselves of this pesky blood shortage? Well… I ain’t gonna tell ya. This flick has a great ending. And that’s all I’m gonna say. Go see it. If you enjoy Vampire movies that are neither love story fluff, emo-sullen drivel, or the typical gory bloodbaths we all expect, I implore to check this film out. Sure, it has silly moments, but what horror film doesn’t? It’s fun and well worth it. Go. Now! 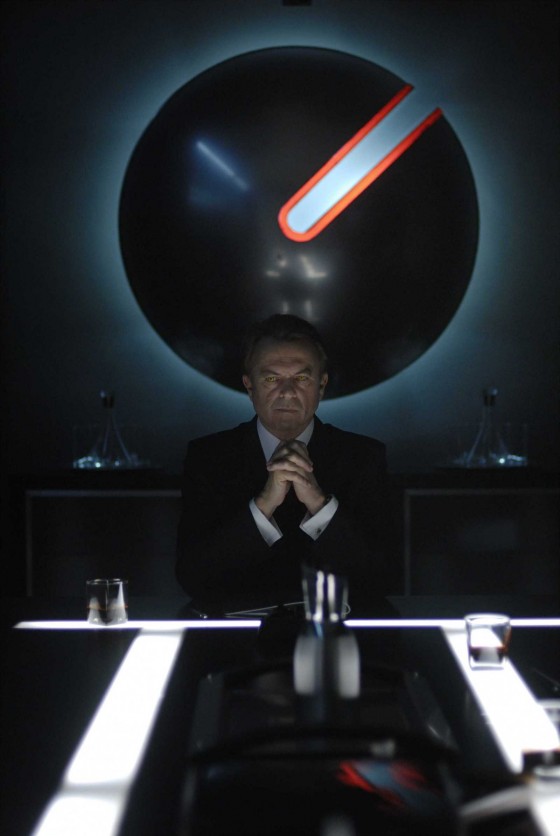