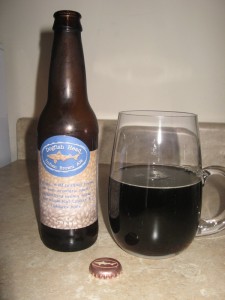 As always, in our Drink Better Beer articles we’d like to encourage you to branch out and try more than your normal type of beer. This time we’re back with another great Beer from Dogfish Head and it’s their Indian Brown Ale, which is not your typical brown ale.

Indian Brown Ale is a dark beer with a roasted and surprisingly hoppy scent. It has a strong roasted coffee flavor combined with a hoppy bitterness that makes this beer stand out from all the other brown ales out there. It also has a relatively high alcohol content (7.2%), which is balanced by its strong flavor.

According to Dogfish Head:

“A cross between a Scotch Ale, an I.P.A., and an American Brown, this beer is well-hopped and malty at the same time. It is brewed with Aromatic barley and caramelized brown sugar.

Dogfish Head (described as “off-centered ales for off-centered people”) was Delaware’s first brewpub when it opened Dogfish Head Brewings & Eats in Rehoboth Beach in 1995. Since then they’ve focused on making interesting beers with unusual ingredients.