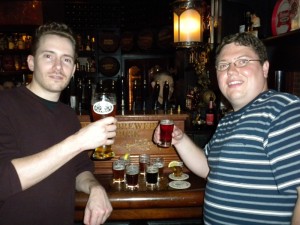 Last week a few representatives of the Gunaxin crew made our way to New York for the premiere (well, the second showing) of Midgets Vs. Mascots. The night before the showing we decided to head down to Times Square (we were in New York, we had to see the sites), which happened to be unseasonably warm for an April evening. So after taking in the sites we were getting a little thirsty (and entirely too sober), but luckily for us we happened upon a Brewpub less than a block from Times Square. The Heartland Brewery and Chophouse to be exact.

So we headed in and found a spot by the bar, Ben decided on an Indian River light, but I decided to get the Seasonal Voyage. It was a sampler that included all 6 of their classic beers and two (it says one on the menu) of their seasonal beers, so I could tell you about all of their beer (really so I could try all their beers).

First up I tasted the Indian River Light. It started with a very strong orange scent, followed by a light orange flavor and a smooth finish. It was a a smooth refreshing beer, perfect for a hot summer night.

Next, I tried their Cornhusker lager. Honestly, I didn’t even write any notes down about this one. I’m not saying it was a bad beer, because it wasn’t, it’s just that it was your typical American style lager. If you’re a fan of Bud or Miller you’ll probably like this one.

The third beer I tasted was the Harvest Wheat Beer. It started with a light lemony scent, followed by a stronger lemon flavor.

The fourth beer I tried (and also my favorite) was Indiana Pale Ale. It has a strong piney hop scent, followed by sweet malt flavor and finishes with a bitter hop flavor. I was surprised by the the pine scent and flavor, but I found it very enjoyable.

Next up I tried their Red Rooster Ale. It had a very light sweet scent and a malty alcohol flavor with a slightly hoppy finish. It reminded me of a typical red ale, but with a much stronger alcohol flavor.

The last of their six classic beers that I tried was Farmer Jon’s Oatmeal Stout. It had a strong roasted coffee scent, followed by a smooth coffee flavor with chocolaty accents.

Wildflower Wheat Beer was the first of the two seasonal beers that I tried. It started off with a light citrusy scent followed by a strong orange flavor. It had a stronger flavor than their classic wheat beer, and it was more orangey, where the Harvest Wheat Beer had a lemony flavor.

The last beer I tried from the sampler was the Grateful Red Lager. Like their other Red Ale it had a light sweet scent though it was stronger than the other, followed by a  strong malty alcohol flavor. In this beer you could taste the alcohol even more than the other Red Ale, I wouldn’t say it was overpowering but it was certainly noticeable.

As we were paying, the bar tender also gave Ben and I a sample of their Black and Tan. From what I could tell, it was the Farmer Jon’s Oatmeal Stout and the Cornhusker Lager. It was certainly a smooth way to end our stay. 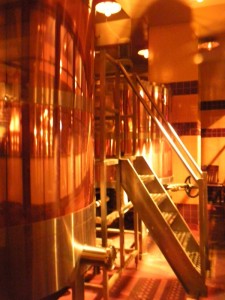 Heartland Brewery currently has 6 New York City locations, according to their website:

When Heartland Brewery opened New York’s first American-style brewpub on Union Square in 1995, our city could not be considered the hotbed of brewpubs, beer and the evolved beer drinking experience it is today. Heartland was one of the pioneers to ignite New Yorker’s passion for craft beer. Since then, Heartland has consistently brewed New York’s freshest craft beers, including the Heartland classic six as well as a wide range of unique seasonal brews.

Brewers at Heartland assemble a variety of distinctly American ingredients to create Heartland’s beer recipes. Heartland’s beers taste different than beers from Germany and Britain because they are made from indigenous ingredients like Wisconsin malt, hops from Washington and Oregon, and American yeast. All beers are served at their freshest within one to two weeks of brewing. That’s what we at Heartland call “Real Beer”.

It did not take long for Heartland’s brewing techniques to be recognized. Heartland’s Farmer Jon’s Oatmeal Stout won a bronze medal at the prestigious Annual Great American Beer Festival in Colorado in 1995 and gold medal in 1997.

The well-prepared food and carefully designed, homey setting won accolades as well. Heartland was named Best Brewpub by New York magazine in 1996 and 1997. Within 10 years of pouring it’s first beer, Heartland has grown into the largest group of brewpubs in the region.