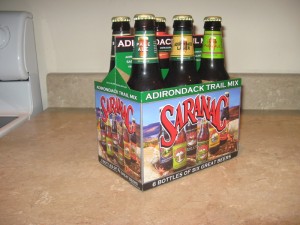 A beer that would make the English jealous! This true English Pale Ale is rich and fruity, yet finishes crisp. You’ll love the copper amber color and medium body.

After being a little disappointed with their Pale Ale, I was pleasantly surprised by the Black Forest beer. It’s a dark beer with a smooth slightly roasted malt flavor. If you’re a fan of dark beer you might be underwhelmed by relatively low roasted flavor, but I found this beer to exceptionally smooth.

A hop lover’s delight. In the India Pale Ale tradition this brew is very hoppy in both aroma and flavor from the generous amounts of cascade hops used in brewing. Look for a medium to full body and golden straw color.

It starts with a faint hop aroma, stronger than the Pale Ale, but not as aromatic as a lot of other IPAs. I was actually a bit surprised that only one type of hops (Cascade) was used in the IPA but 2 types were used in their Pale Ale. The flavor starts with a light maltiness, followed by a nice hop bitterness. This is a very smooth easy drinking beer, it’s not extremely hoppy like a lot of IPAs, people who aren’t fans of extreme hoppyness will really enjoy this beer.

This Brown Ale is brewed with American malt and hops, and traditional ale yeast.  Look for a sweet, chocolaty taste, with balanced bitterness resulting in a full flavored but smoothly drinkable beer.

Brown Ale starts with a nice roasted barley scent, which is followed by a smooth chocolaty flavor. It has a nice dark brown roasted color with a light white head.

A beer lover’s dream! This classic irish stout and amber lager blend is malty, yet pleasantly bitter with many complex flavor notes. Look for a deep brown-black color and full-body.

I’ve always loved a nice black & tan, with Guinness floating on top of Bass Ale. But I’ve always been a little disappointed with the lack of separation in the premixed black & tan, losing the transition between the malty dark beer and the light hoppy Ale. Then I thought about the advantages of the premixed black & tan. Saranacs Black & Tan starts with nice roasted, slightly hoppy, scent and has a chocolaty roasted flavor mixed with a dry hoppiness you don’t usually get with a dark beer, giving you the best of both worlds, or at last an interesting blend of each style.

Our classic German lager has a perfect balance of caramel malt sweetness. Look for a rich, amber color and medium body.

If your only experience with lager is a light american lager like Bud Light or Miller Light then you’ll be pleasantly surprised by Adirondack Lager. It has a sweet scent with a strong malty flavor, in other words it actually has a good flavor.

Even though there are a few better examples out there of some of these styles, the Adirondack Trail Mix was a satisfying mix of 6 different styles of beer. In my opinion the beers rank as follows:

Saranac Brewing company is located in the Adirondack Mountains in Utica, NY. According to their website the Brewery originally started as the Matt Brewing Company:

As one of the few remaining great American regional breweries, the Matt Brewing Company has prospered at the foothills of the Adirondack Mountains in Central New York for over a century. Under the leadership of the third (Nick) and fourth (Fred) generations of the Matt Family, the Brewery has earned the reputation as one of the most respected specialty brewers in the country, producing a variety of distinctive, flavorful beers.

In 1885, young F.X. Matt I, a German-born immigrant, left a promising career at the famous Duke of Baden Brewery in the Black Forest region of Germany to travel to the United States with the determination and dream of owning his own brewery someday. After several years of brewing experience at the Bierbaur Brewery, F.X. Matt re-organized the faltering brewery to create The West End Brewing Company in 1888. Serving as both the star salesman and brewmaster, the brewery quickly became one of the largest and most successful of the 12 breweries operating in Utica at the time.

Today, Nick Matt (President) and his nephew Fred (Vice President) continue this proud tradition with the celebrated Saranac family of beers – a beer brewed to the same exacting standards of quality F.X. Matt established more than a century ago.