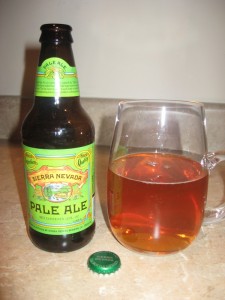 Pale Ale is Sierra Nevada’s flagship beer. It’s smooth and flavorful with a pleasant hoppyness that makes a fantastic beer. Sierra Nevada uses Magnum, Perle, and Cascade hops to create a subtle flowery bitterness that’s not overpowering, but really sets the tone for this beer. The mellow amber color hides a robust malty flavor that puts a lot of other beers of this style to shame. There’s a reason that Sierra Nevada Pale Ale is easy to find. You might not consider Sierra Nevada’s Pale Ale pale compared to a light american beer but I’ll refer to Wikipedia to explain why it’s called pale ale:

Pale Ale is the second beer I’ve reviewed from Sierra Nevada Brewing Co., the first was 2008 Celebration Ale.  2008 Celebration Ale is basically an amped up version of their Pale Ale, it’s hoppier, with a stronger flavor. They’re both balanced great beers, and according to their site:

“Our most popular beer, Sierra Nevada Pale Ale, is a delightful interpretation of a classic style. It has a deep amber color and an exceptionally full-bodied, complex character. Generous quantities of premium Cascade hops give the Pale Ale its fragrant bouquet and spicy flavor.”

Sierra Nevada brews quite a few specialty beers in their Chico California brewery. According to their website:

“In 1979, Ken Grossman began building a small brewery in the town of Chico, California. His goal: to brew exceptional ales and lagers. Today, the Sierra Nevada Brewing Co. is considered the premier craft brewery in the United States. And the beer? Critics proclaim it “Among the best brewed anywhere in the world.”