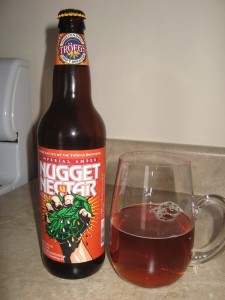 Recently, I keep hearing about Nugget Nectar. When I was at Cranberry Liquors I ran into a crazy guy who emphatically recommended Nugget Nectar, then he went on a long tangent about maple sugar beer so I had to get out of there. About a week later I was back at Bocktown in Pittsburgh and some of the employees were also talking about Nugget Nectar. So, after having some fantastic microbrews on draft, I picked up a 24 oz bottle to try later.

I have to agree with all the praise this beer has been getting, and if you love hops you’ll love this beer too. It starts off with a very strong flowery hop aroma, followed by a biting maltiness, and finally a strong but not overpowering bitterness. We have to recommend you try this beer if you can still find it. According to the site:

Squeeze those hops for all they’re worth and prepare to pucker up: Nugget Nectar Ale, will take hopheads to nirvana with a heady collection of Nugget, Warrior and Tomahawk hops. Starting with the same base ingredients of our flagship HopBack Amber Ale, Nugget Nectar intensifies the malt and hop flavors to create an explosive hop experience.

Brothers, Chris and John Trogner, were drawn to brewing by a mutual love of beer and dislike of their jobs. According to their site: