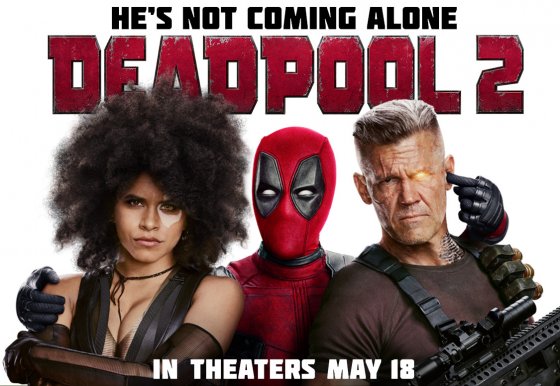 Before we begin, be warned: this review contains what Captain S’chn T’gai Spock called “colorful metaphors,” in keeping with Deadpool 2‘s vulgar tone. That said, there’s no mincing words: Deadpool 2 is goddamn fucking amazing. And to quote our editor, when presented with this proclamation: “If that offends you, this movie probably will, too.” 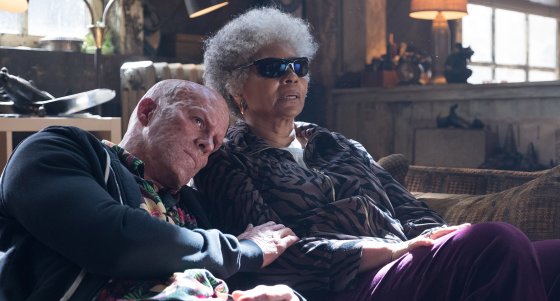 If you’re expecting the filmmakers to have toned it down, you’re in the wrong theater. Hopefully, you’re expecting more of the same, and lots of it; even then, you won’t be expecting half of what you get. Starting with a spot-on lampoon of Daniel Craig-era James Bond title sequences – accompanied by an Adele-esque theme song by none other than Céline Dion – Deadpool 2 screams along at merciless speed, giving absolutely zero fucks about who gets run over or what kind of carnage it leaves in its wake. 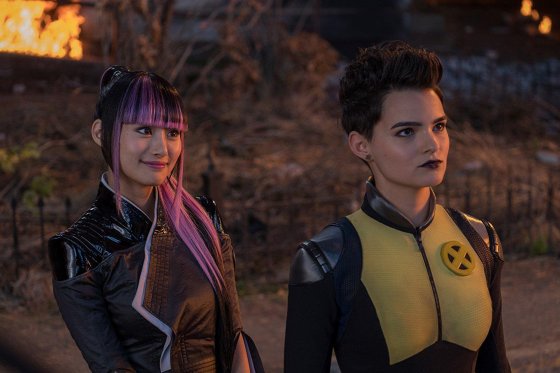 This is one of those films which goes for broke, leaving everything on the screen and not minding if it gets a ton of it on you. One can palpably feel the glee with which returning writers Rhett Rheese and Paul Wernick – this time joined by Wade Wilson/Deadpool himself, Ryan Reynolds – penned every last car crash, explosion, brain splatter, bodily mangling, and cinematic in-joke. The script alone is enjoyable, brought to intense and exultant life by all of this film’s actors – yes, even that one wordless cameo by an actor whose split-second appearance will surely take you out of the film while he’s onscreen. 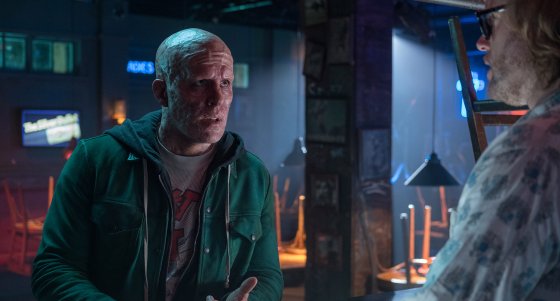 Of course, Deadpool 2 is chock-full of those audience-extracting moments, so don’t take that as a complaint. Instead, take it as an example of the near-constant shenanigans this film throws at you. Compared to the more serious and deadly tone of the first film (which is on in the background as this review is being written), Deadpool 2 is a walk in the park. It’s less an action film and more of a comedy movie in the middle of an action minefield. 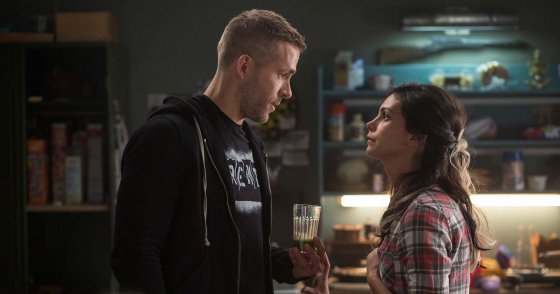 The laughs are driven, of course, by Reynolds in his career-defining role as Deadpool, the ultimate embodiment of the id. Nothing and no one is sacred to him, except for the love of his life, Vanessa (Morena Baccarin), and even she’s given the shit-eating-grin treatment. Brutal evisceration and turning bad guys into bullet-riddled Swiss cheese? Ehhh, just another Monday morning. Getting ripped in half or being fully dismembered? No sweat- just a quick rest and he’ll have his legs back under him in no time. (The size of said legs, though, is in question at one point.) 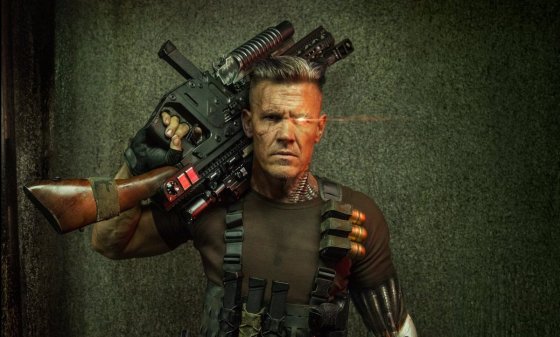 But being targeted by time-traveling mercenary Cable (Josh Brolin, making his second appearance in a Marvel-based film this year)? A guy who stacks up against Robert Patrick’s T-1000 as far as indestructibility, power, and computer-enhanced skills? There might be a teeny-weeny problem. Brolin’s Cable isn’t easy to laugh at, considering the inherent dramatic weight his role lends to the proceedings, but there’s a bit of humor to be mined – at his expense, of course. His appearance in Deadpool’s timeline may be considered more than a small nod to a certain critical-darling science-fiction film from 2012, but that’s neither here nor there. 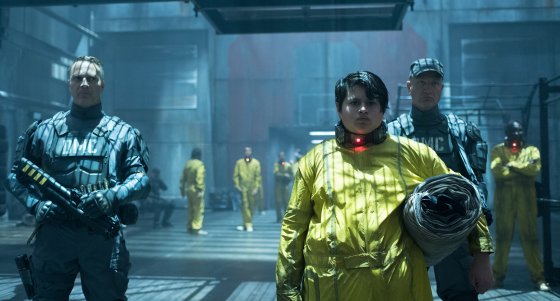 Much like the original, Deadpool 2 keeps the audience appropriately uncomfortable, and not just through its violence and vulgarity. It also pushes the envelope with its take on child abuse and how its violence trickles down through its victims. We’re brought here thanks to teenage mutant Russell Collins (Julian Dennison), stuck in an orphanage where the “caregivers” take a sick pleasure when it comes to terrifying and demonizing mutant children. It’s obviously a slap against dehumanizing, religious-driven gay conversion “therapy,” and Deadpool doesn’t put up with it. Not for one minute. 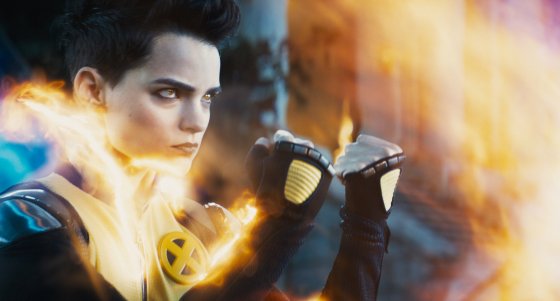 Uncredited John Wick co-director and producer David Leitch (who also directed last year’s stunning Atomic Blonde) takes the reins from Tim Miller, imbuing Deadpool 2 with an extraordinary balance of drama, laugh-out loud humor, and action. Yes, you’ll be guffawing almost every thirty seconds thanks to the punchy script and the improv-like talents of the cast, but Leitch manages to slip in devastating action with high stakes to match. The film’s major action setpieces command your attention, no matter how much shade Deadpool throws at everything while he’s in the thick of it. 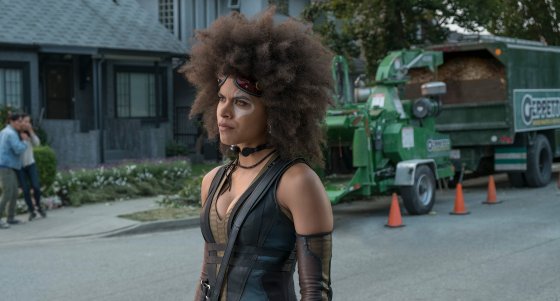 As Deadpool, Reynolds is the obvious centerpiece. He’s every bit as enjoyable as he’s ever been, making this second outing in the red and black Spandex a hilarious thrill ride. Backing him up is a cast capable of hanging with him pound for pound and jab for jab (both metaphoric and literal), especially German import Zazie Beetz as Domino, the human version of Falkor from The Neverending Story. She is good luck in human form, a deus ex machina made flesh; she not only provides this talent for Deadpool’s X-Force (the auditions for which are a hoot and a half), she also serves as a spritely contrast to the darkness surrounding Deadpool and Cable. 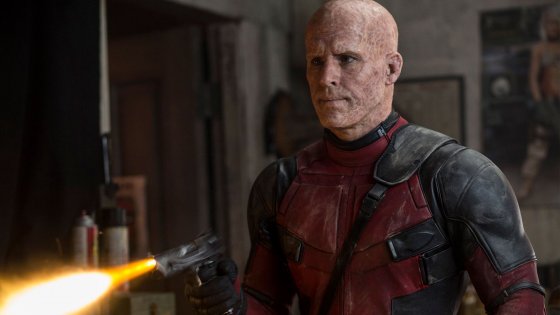 But fuck all that. You’re paying money to sit in a dark theater for two hours because you want to see, as George Carlin once put it, “shit blowing up and bodies flyin’ around!” Well, you’re also there to see the continuing adventures of one of the most memorable, irreverent, and engaging superheroes as he finesses the line between drama and metaparody before shitting completely on that line and throwing every expectation out the window. Headshots, dismemberment, the foulest of language, fourth-wall breaks, and one of cinema’s great cameos all thrown together to paint a twisted version of Da Vinci’s Last Supper? You can’t ask for more than Deadpool 2.

MPAA Rating: R for strong violence and language throughout, sexual references and brief drug material.
Mid-credits scene? Yes. (There is nothing after the credits.)
Running time: 119 minutes.
Released by 20th Century Fox.

Deadpool 2 screams along at merciless speed, gleefully giving absolutely zero fucks about who gets run over or what kind of carnage it leaves in its wake.