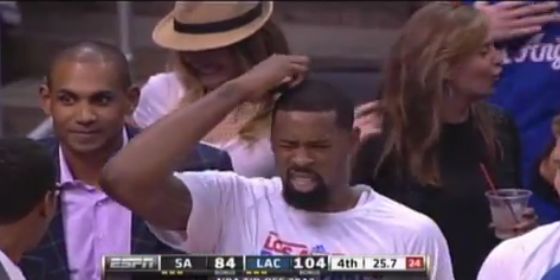 The Clippers gave the Spurs their first loss of the season Wednesday night, with a 106-84 win in LA. The Clippers went over .500 on the season thanks in big part to DeAndre Jordan, who scored 20 points while recording 11 rebounds. While his big game was impressive, it was Jordan who was left stunned after Jamal Crawford made an amazing play late in the game.

Playing in garbage time with the game well in hand, Crawford dribbled the ball between Spurs’ PG Nando de Colo’s legs in front of the Clippers bench. This play left Jordan clearing impressed on the sideline, which was obvious from his animated reaction to the play. While Grant Hill and Blake Griffin were entertained by Crawford’s play, Jordan couldn’t help but show his (profane) appreciation. We can’t wait to see his reaction when the play actually matters.