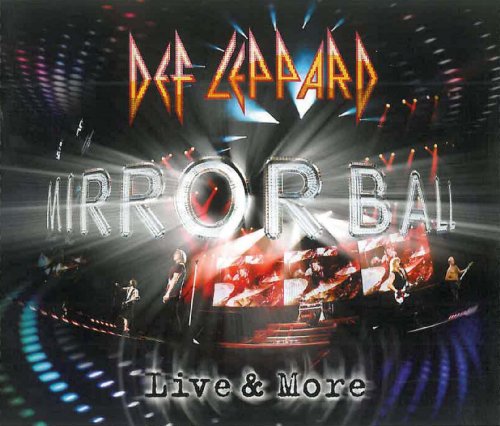 Def Leppard has been putting out albums since 1980, but they can never be accused of rehashing the same stuff on new albums, like Iron Maiden. Thirty-one years after their debut, Def Leppard’s latest release is their first live one, Mirror Ball, a two-disc album with a DVD. It’s coming to us more than two decades late.

It gets off to the right start with “Rock! Rock! (Till You Drop),” and contains the obvious hits like “Animal,” “Too Late for Love,” “Foolin’,” “Love Bites,” “Pour Some Sugar on Me,” “Photograph,” “Hysteria,” “Armageddon It” and “Rock of Ages.” There is a way-too-short rendition of “Rocket,” which is inexcusable because I’ve seen them play ten-minute epic versions of that song that put the pavilion in a trance. They do, however, play a great version of “Bringin’ on the Heartbreak,” where you can really feel the “live” aspect to the song more than any other.

Regardless of Mirror Ball, I still don’t understand why they didn’t release a live album in their prime, after 1987’s Hysteria, or even Adrenalize. They certainly couldn’t have been waiting for the arrival of “C’Mon C’Mon” or other songs that sucked from the Sparkle Lounge – the tour this album came from. Back then, they didn’t have any problems putting out multiple live videos (those wonderful VHS tapes), so why not an album?

For those with file-finding skills, these aren’t the only live tracks out there. Years ago, awesome live tracks leaked onto shady file-sharing sites, many of which were better than the tracks on Mirror Ball. There’s even an unplugged version of “Pour Some Sugar on Me” floating around.

All in all, there are too many songs on this album that fans won’t care about. “Nine Lives,” anyone? When you hear “Kings of the World,” you’ll wonder if they also dress like Queen while ripping off their sound.

So, I asked the question last year, Is Def Leppard Cool? I can honestly say…  no. They just have several great songs that we’ve been waiting to hear live.