Carmelo Anthony, the only player of consequence the Denver basketball community has known in recent memory, has been traded, along with Chauncey Billups, from the Nuggets to the New York Knicks. There are approximately 80 other features of note exchanging hands in the three-team deal (the trade was finally realized with the intervention of the Minnesota Timberwolves). Whatever… none of it matters. Denver gets a plethora of mid-level talent, some draft picks, and a some money in exchange for the only players in the deal of tangible value.

As this is being typed, it is 10pm MDT by a man who has called Denver home for over 10 years while calling the NBA a source of distraction for 30… and there will be no reason to read the reactions over the blogosphere, internet media, and newspapers tomorrow, because those reactions are have already been reported for weeks.

The new king of MSG?

In New York the tide of optimism will rise to fever pitch. The Knicks have overachieved, sitting in second place in the Eastern Conference with a roster boasting only one definitive power (power forward Amare Stoudemire) as the deal goes down. The addition of Carmelo will mark, in the minds of most, the arrival of hope and dreams. This team will now be expected to compete against the Boston Celtics and Miami Heat for the right to represent the East in the NBA Finals, the compass of basketball greatness will once again point to the most passionate hardwood town in the country, and most will mark today as the beginning of dominance the Big Apple has felt is long overdue.

(And no, there will likely be no mention of the four starters they released in the process… this is the NBA. It’s not a league of teams. It’s a league of individuals.)

This is not shocking, it is not surprising, and it should not be offensive (unless you live in Boston… in Miami, they couldn’t give a fuck less).

What may shock is the joy that will pour from Denver. The town accepting a handful of could-be commodities and a future without a single blaze of hope will be as happy without Carmelo as New York will be with him. Most will suggest this is due to the aggravation built over months and months of speculation, the daily spew of negative emotion and insinuated hatred towards the Rocky Mountains from Melo’s own mouth, and the town’s desire to get away from this spotlight and to move on with their lives.

To be certain, all of that plays a role and is, without question, of consequence… but in truth, Denver’s joy in moving on without Melo is an indication of three undeniable facts combined for one undeniable reality in the thin air. 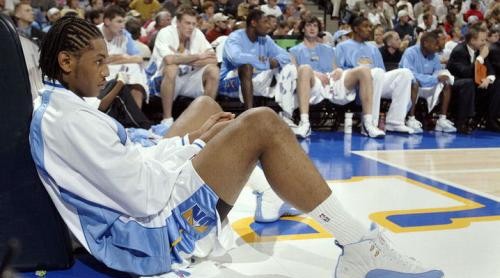 1) The Nuggets are not and never will be one of the blessed organizations of the NBA, and Carmelo Anthony was a simple (and for many, a now regrettable) one-night stand.

2) We aren’t talking about the Denver Broncos, where hopes and dreams stake claim in the Mile High.

3) The city of Denver has and will happily accept those realities with players who graciously do the same rather than compete for higher stakes with players incapable of accepting this community as their own.

Since 1980 – over the course of 31 seasons – the NBA has seen EIGHT different teams as a league champion. Of those eight teams, only two – the 1982-83 Philadelphia 76ers and the 2005-06 Miami Heat – have served as one-and-done champs. The Rockets were blessed with (a) the rise of Hakeem the Dream, and (b) the fall of Michael Jordan and Major League Baseball. The Lakers, the Celtics, the Bulls, the Spurs, and the Pistons have owned a monopoly on league titles… no one remembers #2 through #30 in any of those seasons, and no one will in seasons to come.

The list of cities who can afford hope and dreams when it comes to the NBA is as small as any professional sports league on the map. Denver isn’t one of those cities. It never has been and it never will be, and the bulk of the folks in this town know and accept this.

The only fact Denver might struggle to accept is the loss of Billups. He is one of the town’s own and the heads of the local papers and sports radio will be more than happy to reflect on his influence in this town. No one will complain about losing Melo, talented and apathetic… everyone will complain about losing Chauncey, not as talented and benevolent.., but in truth, Billup’s hometown connections only serve to justify this list.

Chauncey may have been the hometown hero, but he didn’t sell pizza (just ask the folks at Blackjack), he didn’t raise the stakes (just look at the results), and he didn’t have the power to overcome the realities listed above. No one (or two) players can, a realization accepted in Los Angeles, San Antonio, Boston, and Miami.

We’ll see if New York gets the message… but for now, here’s to the joy of the moment, both for Denver and New York. It was a fun romp with Melo, but as most relationships without a future go, the regret of time wasted has settled in and the time to toss all of the bickering and reciprocated disgust to the curb has finally come.

It’s time to clean the sheets and get back to reality.