Sports > Baseball > Derek Jeter Comes Out of the Closet

Derek Jeter Comes Out of the Closet 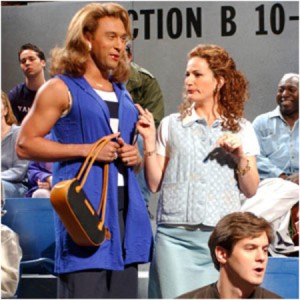 The lying is through. The masquerade is over. Derek Jeter, a single thin man in his mid-thirties has finally come out of the closet and admitted what many have long suspected. That he is gay. Not that there’s anything wrong with that.

Rumors have long circled the long-time Yankee, with potential gay lovers ranging from Johnny Damon to Alex Rodriguez to Neil Patrick Harris to Bill  Brasky. Last year, several teammates complained about the situation, with an anonymous teammate exclaiming, “He really thinks he’s fooling people, but he’s not. Every time I take a shower and turn around, there he is. I wouldn’t mind his offers to wash my back if he didn’t always have an erection.” At the time a flustered Jeter played down the rumors, quickly lisping, “No way! I would never do that.” He further added that simply because he likes Depeche Mode, people tend to think he “takes it up the ass.” But Jeter thinks that logic is nonsense, who added that “Depeche Mode is a sweet band!” His publicist later released a statement that Jeter could not be gay because he’s “totally awesome”.

Jeter apparently had a change of heart this season, satisfied with the fact that he was no longer fooling people. That and there were only so many female celebrities one can date to cover up the truth. With the truth out there, a weight has been lifted off the shortstop’s shoulders, who can now focus solely on gobbling up balls in the field and laying some wood to balls at the plate.

Fans reaction seems overly positive. “I still support the Captain!” stated one fan. And many claimed they knew all along, so it’s not like it’s a surprise. Another fan simply stated, “I like my beer cold, my TV loud and my homosexuals flaming.” Flame on Captain Jeter!

One final tip to all future Jeter boyfriends, he mentioned he liked his Tossed Salads with syrup.