If you own a television, than you probably see about as many car commercials as we do. While some of them get creative for the Super Bowl, in general they tend to follow a similar formula. Alternatively, many car companies are going the route of product placement, by paying to have their cars featured as part of the content both on television and in movies.

The folks at Jaguar have declined both of those routes, and decided instead to create their own awesome content. Golden Globe & Emmy Award winning actor, Damian Lewis (Homeland), plays film lead alongside Jordi Mollà and Shannyn Sossamon. The film tells the story of Clark (Lewis), who delivers cars for a living, running into trouble after a chance encounter with a mysterious, young woman (Sossamon) in the middle of a lawless desert. Check out the trailer:

So yeah, that’s certainly a new take on advertising a car.

“Our aim is to craft the most visionary and highest quality filmic product ever created in conjunction with a brand.” ~ Adrian Hallmark, Global Brand Director, Jaguar

Judge for yourself if they’ve accomplished their goal, as the full promotional film from Jaguar and Ridley Scott Associates is included below:

If we had the funds, we’re not sure we would need much more convincing to purchase the new F-Type, but the fact that the 2014 model was named 2013 World Car Design of the Year certainly helps. Many car companies have said it before, but the F-Type interior was inspired by a fighter plane cockpit. The difference here is how close they came to mimicking their inspiration. 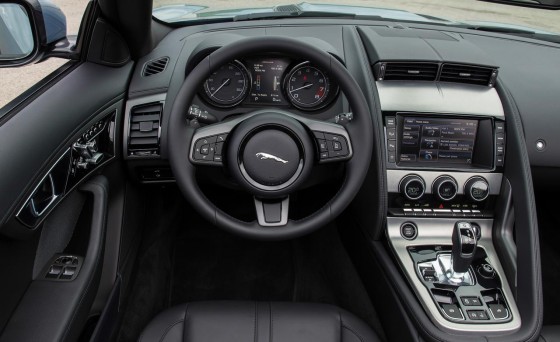