Devasting MMA Submissions, That Probably Won’t Work For You 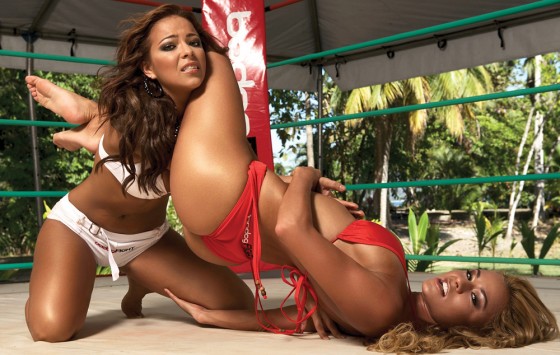 She’s doing it wrong, but we don’t care.

The age of MMA has spawned a new breed of tough guy. No longer are these douchebags running around claiming to hold blackbelts in Karate. Instead these Affliction wearing self tanners have armed themselves knowledge gained from watching mixed martial arts matches and believe that they can make you ‘tap or snap’! They now roam the streets looking to take someone’s arm home with them as a prize.

But what would your fate be if you ever encountered one of these pay-per-view trained assassins? If you could get past the smell of the half a can of Axe body spray, would you stand much of a chance, or would you be choked into unconsciousness in the blink of an eye?

Former UFC fighter Sam Hoger gave us some insight into what we have to fear from someone off the street who is looking to put you into one of these holds.

1) Triangle from the bottom

Long a favorite of fighters because not only does it allow you to choke out your opponent, but also the last thing he will know is the smell of your balls in his face. 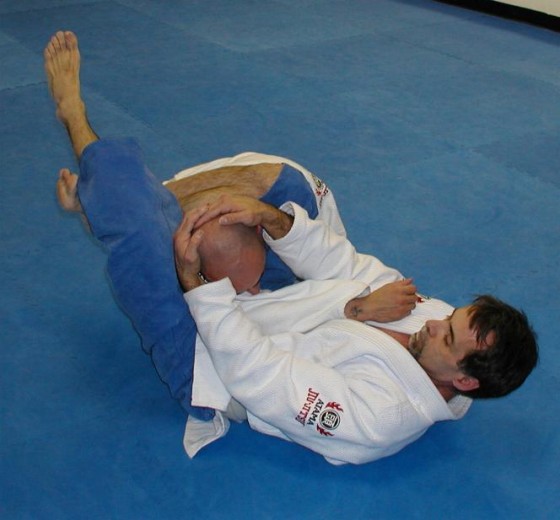 “Wait, I remember something…..”

The pros make it look extremely easy but we’re told that on a scale of difficulty from 1-5, with 5 being the hardest, this move is actually rated a 5 for the untrained guy .

First and foremost if he is trying this move it means that you are already on top of him, probably trying to punch his face back to its natural color. Then it requires an understanding of hip movement and angles to lock it in tight, an understanding your opponent is unlikely to have after downing some Jacks and trying to avoid your fists.

This submission move works by crushing your opponents windpipe against your shin. 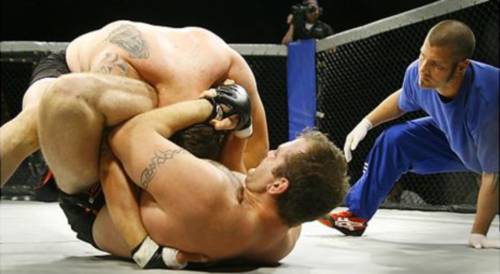 Plus you know, the whole balls thing again.

Even though the name sounds like a Japanese monster movie it can seriously wreck an opponent if performed correctly. Luckily, you probably don’t ever have to worry about getting slapped with one of these.

As Hoger explained, unless you are “comfortable putting both of your feet behind your neck then you have no business trying this move.” He rates the move a 5 on the difficulty scale. This is probably even harder to pull off wearing tights jeans and weighed down by gold chains.

Famously used by Frank Mir when he defeated the half human, half human growth hormone known as Brock Lesnar, this move has been shown to make even the toughest competitor call it quits or risk breaking a leg. The move is performed by grabbing an opponent’s leg and pressing your hips into the knee to bend it in ways it was never meant to bend, kind of like the world’s most extreme leg hump. 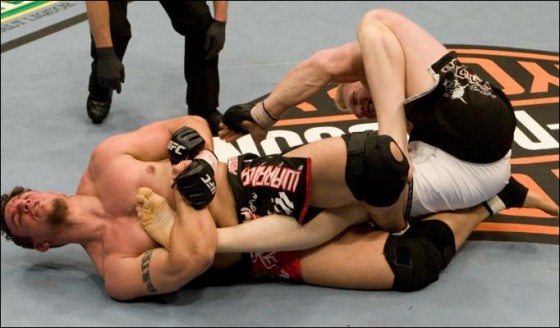 This rates a solid 4 on the scale though because the leg has some of the largest muscles in the human body. Our resident expert compares trying to perform this move to trying to fight a baby alligator. Sure, it may look cute, but the fucking thing is going to be all squirmy and shit. So while your opponent is thinking knee bar, you’ll probably have time to think of various ways to plant your other foot into his head.

So if these moves are going to prove too hard for the average street brawler then what can you use when faced with an angry head of hair gel in a snug t-shirt? Our trained fighter recommends that you stick to the basics and use the awesomely named guillotine choke. This is a variation of the old school headlock, except that you are facing your opponent. 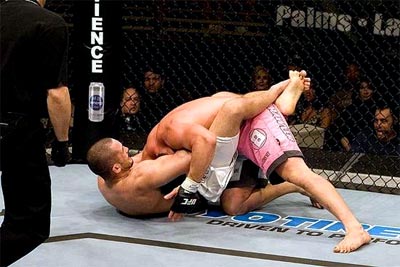 You can even do it lying down if you’re lazy.

The guillotine rates only a 1 for degree of difficulty. While it is effective, Hoger warns that to really make it work you have to work on the “side crunching aspect” and not just try and rip the guy’s head off. This will ensure he actually passes out in addition to feeling a lot of pain. Just make sure you wash the grease off your arms afterward. 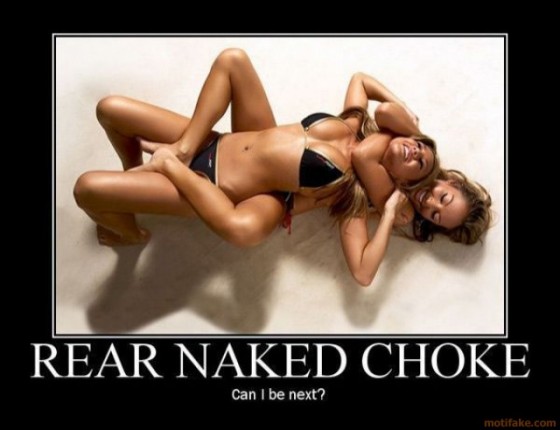 It may not work for you, but who cares?