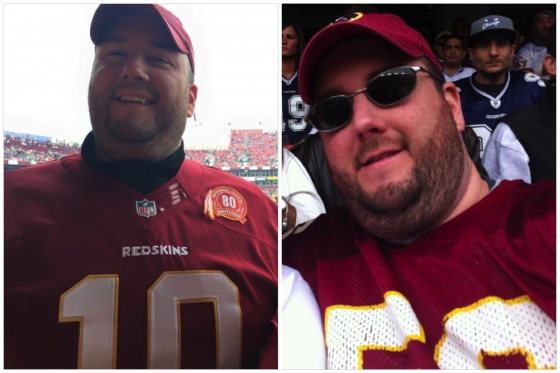 This post brought to you by DICK’S Sporting Goods.

It’s true, I’m a Redskins fan, and I always wear a jersey when I go to the stadium. It’s also true that the two I’m sporting in the photos above are a bit outdated, and it’s time once again for me to consider adding a jersey upgrade to my Christmas list. Let’s consult the DICK’s Sporting Goods Jersey Report to see which Redskins jerseys are most popular this season…

Currently, Ryan Kerrigan is at the top of the list, and that gold “Color Rush” jersey is looking quite sharp. I promise I won’t wear it with gold pants too. While this is a good first step when shopping for a new player jersey, my next step is always to check the contract status of my favorite player, so I don’t get stuck with a Random Sports Jersey. Usually high performing rookies are safe bets, but I definitely got burned on that #10 jersey you see at the top of this article.

Five years ago, DICK’S launched the Jersey Report to engage with fans and showcase favorite jerseys across the country – almost a NFL popularity contest. The report is based on online and in-store sales data and can be viewed by top jerseys overall, offense, defense, rookies and teams. There are a pair of rookies tearing up the league down in Dallas, but amazingly it’s their NFC East rival and fellow rookie, Carson Wentz, who is leading the league in jersey sales this season: 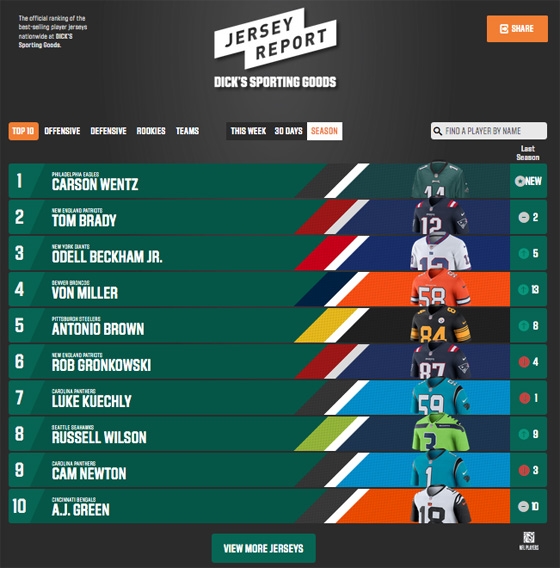 Most of the players on that list are usual suspects, and to be expected, but I’m definitely more than a bit surprised to see Wentz at the top of the league. It seems many Philadelphia fans jumped on his bandwagon early this season, when he came out of the gate hot. Hopefully they don’t regret that decision when he ends up as the backup in Cleveland three years from now. Yeah, I’m still bitter about RG3.

I could play with DICK’s Jersey Report all day, and am excited to see the widget component providing the ability to pull Jersey Report data into other sites, as you see above in my Redskins example above. Which report would you like to see? Your favorite team, the top rookies, top defensive players? All of the data is available at your fingertips. Use it wisely.