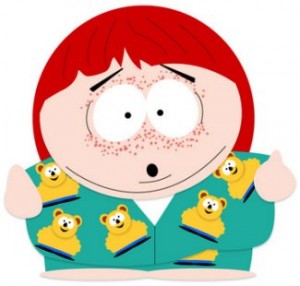 According to the Associated Press:

CALABASAS, Calif. — Authorities say a 12-year-old boy assaulted by a group of middle school classmates in Southern California may have been targeted after an Internet posting urged students to beat up redheads.

Los Angeles County Sheriff’s Lt. Richard Erickson says the boy, who is redheaded, was kicked and hit in two incidents Friday at A.E. Wright Middle School in Calabasas. As many as 14 students participated in the attacks.

Erickson says the attackers may have been motivated by a Facebook message announcing that Friday was “Kick a Ginger Day.” The posting may have been inspired by an episode of the television show “South Park.”

The boy was not seriously hurt. Erickson says there may be other victims.

No arrests have been made.

The episode called Ginger Kids originally aired November 9, 2005 in season 11. Here is the gist of it:

And here is the news report, after it happened last year, too: